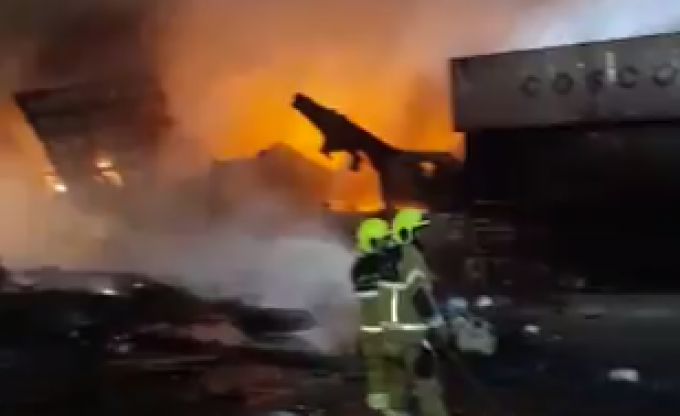 Unconfirmed reports suggest that the explosion and subsequent fire on board a containership anchored at the quay side in Jebel Ali was caused by a container load of fireworks, with initial industry fears of another X-Press Pearl.

The ship, thought to be the 210 teu Ocean Trader, owned by Sash Shipping Group, based in Dubai, had docked yesterday and at around 1am witnesses reported a loud explosion that shook buildings in the city.

An industry source said the vessel was a feeder ship and the cargo would have been transhipment freight. He suggested the vessel had called at a number of ports in the Gulf and at Karachi in Pakistan before arriving in Jebel Ali.

After the explosion, emergency services quickly brought the fire under control – in less than an hour, according to a Jebel Ali Port statement.

Director general of Dubai Civil Defense Maj Gen Rashid Thani Al Matrooshi confirmed the fire was fully under control and “the cooling process is under way”.

No deaths or injuries were reported and the security company Dryad Global, investigating early reports that Israel had retaliated following last week’s attack on the CSAV Tyndall in the ongoing Israel/Iran shadow war, was adamant that there was no military involvement. “It is not how they [the Israeli armed forces] would target a vessel or Iran,” said a spokesman.

A fire caused by an explosion within a container on board a ship at Jebel Ali Port has been brought under control; no casualities have been reported. pic.twitter.com/oMTaJhgEYd

Russia's maritime lawyers call for an end to war in Ukraine

In an admirably courageous move, the Russian Maritime Law Association (RUMLA) has issued a statement ...

Security consultancy Dryad Global has warned that commercial shipping has been targeted off the coast ...

Dryad Global Insane in the Ukraine Ukrainian Sea Ports Authority (USPA) War! What is it good for?
Feb 25, 2022• 0 Comments• Share

Security consultancy Dryad Global has warned all shipping to leave the Black Sea area around ...

The Nigeria Customs Service (NCS) in the Seme region intercepted a consignment of adult nappies ...

Ghana’s minister of information, Kojo Oppong Nkrumah, has called for an international response to the ...

Seafarer shot and others kidnapped from containership in Gulf of Guinea

Up to nine crew members on a containership in the Gulf of Guinea are thought ...