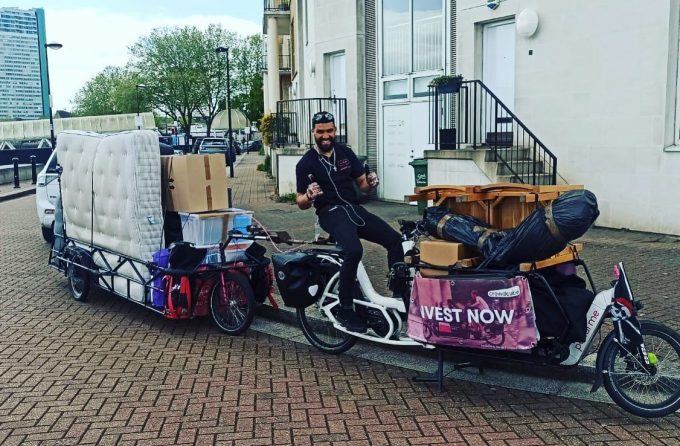 These were the conclusions of The Promise of Low-Carbon Freight report, which, using data from logistics operator Pedal Me, found that adopting cargo bikes not only reduced carbon emissions by 90%, compared with diesel vans, but also increased urban delivery times by 60%.

“Not only considering the time saved in navigating busy and congested roads filled with motorised and polluting traffic, but also the clear advantage of freight deliveries by bicycles in comparison with vans in respect to speed of service.

The study found bikes were dropping off 10 parcels an hour compared with the six recorded by vans, noting that high levels of congestion left vans floundering in traffic as delivery bikes could weave through or take side streets closed to traffic.

CEO and rider for Pedal Me Ben Knowles said despite obvious benefits, increasing cargo bike uptake would also require a change of mindset by logistics companies.

“Most logistics companies are based around a network of contractors and a very clear separation between them and the back-office staff, with those on the ground often in a much more precarious position financially,” he told The Loadstar.

“Change that and you can set very high standards that wouldn’t otherwise seem reasonable, which is part of the reason we are so much quicker.

“This commitment to our staff includes paying them more, and that means they feel more committed to us. This in turn means they carry out more jobs per hour than you see elsewhere, so we end up doing more jobs in the same time, while remaining cost-effective.”

Mr Knowles added London alone presented a potential market of several billion pounds’ worth of work that could be done by bike.

And previous studies have suggested that “at least” 14% of delivery vans in London could be replaced by cargo bikes, while a report from CycleLogistics went further, estimating more than half of all urban van deliveries could be replaced by bikes of one form or another.

DHL Express has spent the better part of a decade expanding its cycle tyre-print, with a range of bikes servicing major metropolitan areas, with a recent focus on London. A spokesperson told The Loadstar: “We operate power-assisted bikes alongside our riverboat service, delivering documents and small parcels into central London.

“They are an effective way of delivering some types of packages in urban areas. We’re constantly reviewing our operations to make sure they’re as sustainable as possible, as well as meeting operational needs, and we anticipate ebikes being an important part of this.”

The latest report provides 12 “crucial steps” for national governments to take if they want to succeed in cutting “illegal” air pollution from their most congested cities. They include providing long-term investments in cycling provision, segregated and wide bike lanes and the levying of charges and taxes that discourage “unnecessary” use of motor-based logistics.

However, on the same day the report was published, MPs from the All-Party Parliamentary Group in the UK showed their intransigence in promoting change to cleaner fuels by condemning government plans to ban the sales of new petrol and diesel vehicles by 2030.

And despite polls suggesting 63% of urban residents are in favour of the plans, group chair Craig Mackinlay claimed: “Sooner or later the public will rebel against this madness.”

Ms Verlighieiri concluded: “Having recognised such potential for the cargo bike sector, there is still much to be done both at a regulatory and provision level to ensure that those options are used at their best potential.”