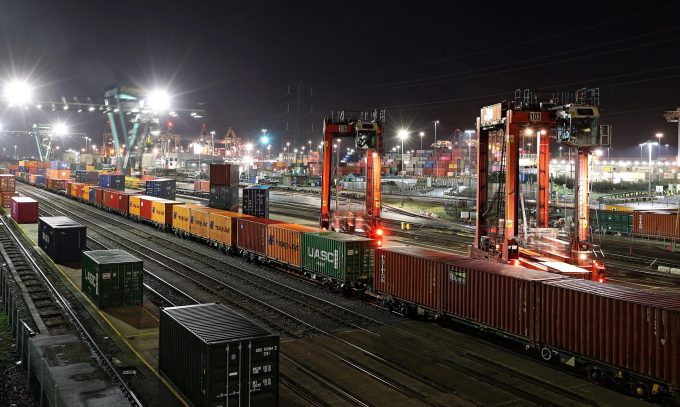 A new intermodal train service connecting DP World’s container terminals at London Gateway and Southampton will boost the resilience of the customers’ supply chains and enable them to switch volumes quickly and easily between the two UK locations.

The DP World operated service – which ran for the first-time last weekend – is scheduled every Saturday carrying cargo including fresh fruit, beverages and consumer goods in less than five hours. The train takes up to 120 lorries a week off the roads and cuts carbon emissions by up to 80%.

DP World plans to increase the frequency of the train next year. Alongside other recent and ongoing investments in rail connectivity at both ports, this will ease motorway congestion, with a total of 300,000 trucks taken off UK roads each year.

John Trenchard, UK Commercial & Supply Chain Director of DP World, said: “DP World is unique in offering customers a choice of deep-water entry and exit points to and from the UK. This new rail service will make it even easier for our customers to switch volumes quickly and easily between the two locations, which means greater flexibility and choice.”

“After the disruption of recent years, shipping lines and cargo owners are looking for capacity, reliability and growth opportunities. We are providing it, enabling customers to move goods smoothly and efficiently in and out of the UK and across their supply chains,” Trenchard added.

DP World – which operates ports, terminals and logistics businesses on six continents – runs the UK’s most advanced logistics hubs at London Gateway and Southampton: two deep water ports with access to freight rail terminals, and a rapidly expanding logistics park on the doorstep of the capital. Between them they moved a record volume of cargo in the first half of the year, with a combined total of 1.93m TEU.

Last month, DP World announced the start of construction at London Gateway’s new £350 million fourth berth, which will lift capacity by a third when it opens in 2024. The construction project is supporting 1,000 jobs and the port-centric logistics park will employ a further 12,000 people when it is completed in five years’ time.

The company has also earmarked a further £1 billion of investment in the UK over the next 10 years.