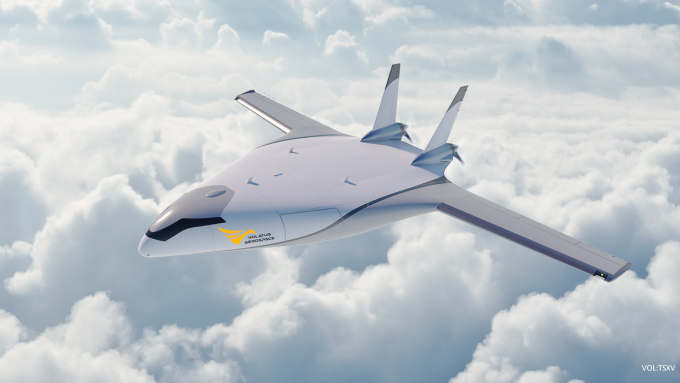 Drone technology is fast developing into a scalable and rapid delivery system. The latest technological advance coming out of the US is the first Natilus 3.8T autonomous aircraft, with the first production delivery spot secured by Volatus Aerospace.

Up to now the drone designs have had relatively small payloads. But the Natilus aircraft features a wide, blended-wing geometry, similar to NASA and Boeing’s X-48B, which the company claims will drastically reduce drag and allow the drone to carry 3,855kg over a distance of 1,667km, or 905 nautical miles.

“[The 3.8T] is a ‘feeder’ freighter, focused on connecting regional/rural locations with the larger supply chain,” Aleksey Matyushev, Natilus founder and CEO, told The Loadstar. “It can be used for connecting the Caribbean islands or feeding an integrator’s network such as Fedex or Amazon… [it] has short take off capability which includes approved operations from dirt runways. However, most of our customers would rarely utilise this.”

In the case of 3.8T, Natilus argues that its pizza-slice profile increases internal cargo volume by 60% thanks to the hold’s unique shape, and reduces CO2 per kg by 50% over a conventionally tubular-shaped aircraft of the same proportions.

The main business case for drones such as the 3.8T are locations where other delivery infrastructure is poor.

“Asia and Africa have poor road infrastructure, so it might take days for a truck to make a trip where an aircraft can do it in a few hours,” said Mr Matyushev. “Similarly, if trying to transport cargo from Hong Kong to Denver, air freight offers a more direct path with less CO2 than using a container ship and rail.”

The 3.8T is one of a series of Natilus designs. The company envisions being able to scale up in linear fashion; at the top end, its 130T ‘intercontinental’ design purports to be able to fly 9,467km (5,112 nautical miles), putting it squarely in the long-haul territory.

An advantage of unmanned flight is greater design flexibility. Traditional passenger aircraft are pressure vessels, with a tube shape and circular cross-section, and cargo aircraft are reverse engineered based on this geometry. But a drone does not require this and can make more concessions to reducing drag and increasing cargo volume.

The field of drone freight is becoming more crowded as companies attempt to bring about the dream of having parcels delivered to a customer’s door by quadcopter. But the particulars are proving more complex, necessitating more intricate designs.

Dronamics is positioning itself as a cargo airline, in miniature. CEO Svilen Rangelov co-founded the company with his brother Konstantin in 2014; their drone, the Black Swan, can carry 350kg 2,500km (1,349 nautical miles) enough to get from London to Moscow, but with a tenth of the Natilus 3.8T’s payload.

Economies of scale are one thing, Mr Rangelov told The Loadstar, but drones cannot be beaten on turnaround. “The bigger the airplane, the bigger the airport,” he said. “Airplanes are getting bigger, more expensive, and they end up serving less of the market.”

But Dronamics is not pitching itself as a competitor to air cargo; to the cargo airlines’ “big trucks”, it is something more akin to a van, Mr Rangelov explained; any village that can dig a dirt runway could play host to a droneport. “You can just go direct from the port or the warehouse to the customer — hand over to a small cargo van if need be. So, you don’t need to containerise everything the way you do in airfreight.”

Clearly, neither Natilus nor Dronamics are no strangers to questions about CO2 emissions.

Dronamics’ answer is that it will be using carbon-neutral bioethanol by 2023. Meanwhile, Mr Matyushev responded: “Natilus aircraft are designed with civil aircraft engines, and we will investigate new fuels as they enter the market. Natilus is very mindful of advances in Sustainable Aviation Fuels (SAF). In the future, hydrogen seems to be a viable alternative for larger aircraft, but supply and engine technology still seems to be a decade out from being viable.”

Mr Rangelov explained that primarily, the Black Swan has been designed with mass-production in mind; for example, its propulsion uses a four-cylinder Rotax engine. “A 747 has over a million parts,” Mr Rangelov said. (It actually has about six million).

“Since there are not many 747s, you end up with [parts] that are very high aviation grade but are needlessly expensive. We are developing our own drones, and we want to be the air cargo airline. Our design looks a lot like a glider. It’s simple to produce, maintain, and operate… and it means faster certification – being more conventional helps you to get to market first.”

Natilus plans to begin delivering its aircraft to air cargo operators around 2025. Mr Rangelov explained that since Dronamics aims to be an operator, it is design-agnostic. “We’re open to using [Natilus] drones, or others.

“I’m sure they’ve done their calculations… they’re very legitimate and so on, but it is further away from being a product than ours.”