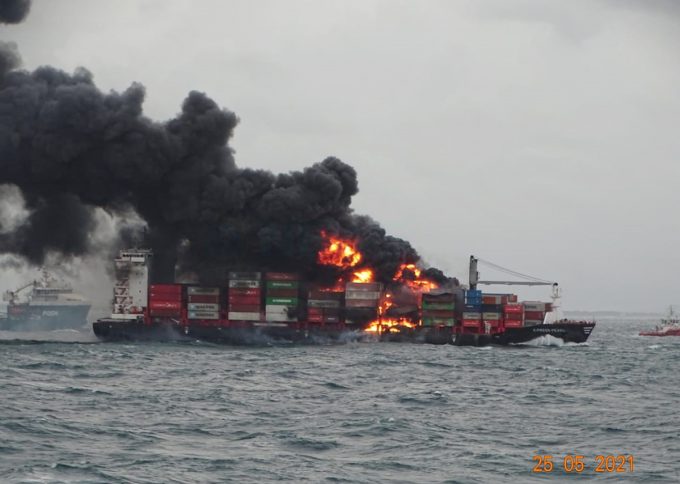 General Average has now been declared on the fire-stricken X-Press Pearl after the blaze aboard the ship worsened overnight due to strong winds and deteriorating weather conditions.

The vessel’s owner and operator X-Press Feeders said that early this morning the vessel’s crew and 12 firefighters disembarked “as a safety precautionary measure”.

“Fire and smoke still remain on board. The salvage team, with fire experts and fire fighters will continue to work on putting out the fire.

Tugs from the Sri Lanka Ports Authority and the Sri Lankan Navy have towed the vessel to 50 miles from Colombo port as fears grow of oil and chemical spills after eight containers fell overboard as the fire continued to spread.

The Indian Navy has sent fire-fighting tugs to assist, while the Sri Lankan Air Force has been dropping dry powder on the vessel to fight the fire, as seen in the video below.

Marine claims consultancy WK Webster confirmed that General Average has been declared, and added: “Cargo surveyors have also been retained to inspect cargo where required and a marine investigator too, this will assist in identifying the nature of the damage suffered and the possible causes, allowing us to then seek necessary recourse for such losses, whether that be in GA or via the traditional recovery route.”

Rohitha Abeygunawardena, Sri Lanka’s ports and shipping minister, visited Colombo Port’s Pilot Station earlier today and suggested that the chemicals carried in the containers, understood to have been loaded at the Indian port of Hazira, were the cause of the blaze.

“The Sri Lanka Ports Authority and all other agencies are working together to overcome this challenge.

“We are trying our best to extinguish the fire as the fire broke out again due to the continuous reaction of the chemical materials in the containers and adverse weather,” he said.

Meanwhile, the head of the country’s Marine Environment Protection Authority issued a general warning to Colombo residents not to collect debris from the vessel’s cargo as it began to wash up on the beaches in and around the city.

The 2,700 teu vessel, which is just three months old, was deployed on X-Press Feeders’ Singapore-Middle East SMX service. It first reported the fire on 19 May while it was waiting for a berth at the port.