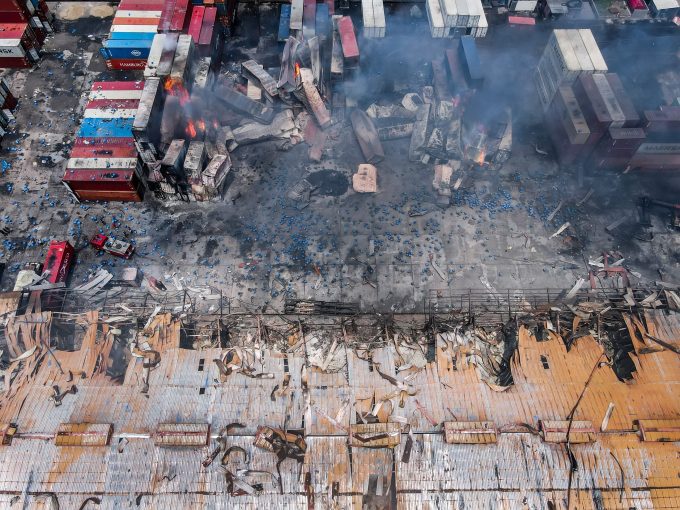 Chittagong Port is storing dangerous goods (DG) that are up to 28 years old, according to port sources, as the spotlight turns onto the auction or destruction of the remaining DG, following the devastating fire at the BM Container depot that has so far claimed 44 lives.

The number of fatalities was revised down by authorities, but there are still many injured in hospital.

The fire has reportedly now been extinguished, but concerns have turned to the 321 teu of DG goods in Bangladesh’s major facility in Chittagong, as well as 445 tonnes of chemicals and DG goods in various sheds, according to Chittagong Port Authority spokesperson Omar Faruk.

These include nitric acid, sulphuric acid, propionic acid and oxygen supplements, alongside various other chemicals, raising fears that another serious event could occur.

Chittagong Port has already suffered a series of DG-related incidents. Yesterday, smoke was seen emanating from an acid-laden container that had been at the port yard for many years, creating panic. That dilapidated box was shifted to a safer place.

On 13 May this year, a container full of batteries and electronic goods caught fire. As long ago as 22 April 2015, a methanol-laden drum exploded at the port while it was being moved from a container yard, injuring four workers.

Of the DG containers stored at Chittagong Port, one was found to have been imported in 1994, while the others are at least a decade old. Port officials have admitted the presence of these old containers at the port yard.

“Yes, there is a 28-year-old container at the yard,” said the port spokesperson who added “a full list of DG containers will come from the customs authority”.

As the anxiety levels created by the fire at the privately owned BM Container Depot have risen, Chittagong Port Authority has now moved to free the yards from DG goods through auction, unless owners take delivery of the cargoes in a timely manner.

In addition, the authority is planning to start delivering DG cargoes on chassis, instead of keeping DG goods in port area, a measure that was used by the Beirut port authority after the 2020 blast, which was caused by ammonium nitrate.

In the past year, the customs authority has destroyed 350 teu in undelivered goods, of which 77 teu were carrying DG. On Monday the last two containers of hydrogen peroxide were auctioned and removed from the port yard.

The total losses from the devastating fire have not yet been assessed.

After extinguishing the fire on Tuesday, at noon, fire-fighters said some 100 full containers were destroyed during the 61-hour long blaze.

Apparel exporters said some 3.03m pieces from 28 factories were burnt, with a value of some $11.5m. However, the account of losses from other exporters has not yet been calculated.

Some seven ships left behind 402 teu on 5 and 6 June, as boxes could not be reached at the port yard during the two-day fire.

More cargo will be unable to be exported over the next few days while the depot is cleared, before operations can resume.

Devastation at the BM Container Depot in Chittagong, following a container fire which is still ...