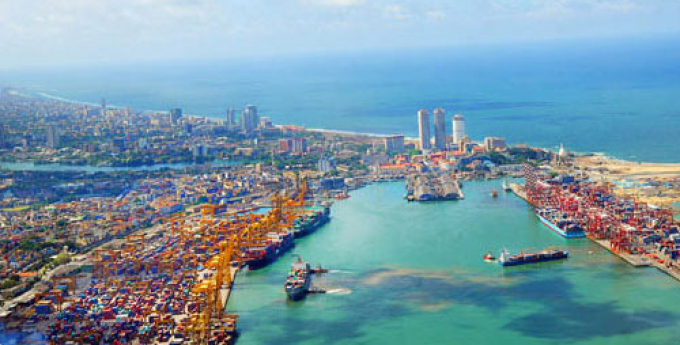 The flow of Indian transhipment cargo over Colombo Port in Sri Lanka is facing heightened disruption as the island nation grapples with its worst-ever economic quagmire.

And this comes on top of Covid-induced woes that have already sent supply chains into a tailspin.

Nhava Sheva and Mundra are the two major focal points for regular long-haul services out of India.

The carrier said that, with this strategy, it could circumvent transhipment delays and help customers get better transit times on available routes from Indian ports.

“We have run four block trains so far and more are in the pipeline,” Maersk said. “We are constantly in dialogue with our customers to understand their priorities and requirements, and are working out options to ensure their supply chains face minimum disruption.”

A PSA terminal manager at JNPT confirmed the proactive cargo rerouting step by Maersk, adding: “We recently received a fully loaded block train from Durgapur (Kolkata) on behalf of Maersk, with containers meant for its ME2 Service.” The ME2 connects India, the Middle East and Europe.

With much strain already around, the acute shortage of fuel forced truckers – handling inter-terminal cargo movements in Colombo – to cut back on their fleet capacity over the past few weeks, causing yard inventory build-ups and shipments missing scheduled connections.

“Colombo has already been under a lot of congestion pressure and these new issues are adding to the delays,” a Mumbai-based freight forwarder told The Loadstar.

“Terminal operations have thus far remained unscathed by the electricity crunch plaguing Sri Lanka. If that crisis finds its way into the ports, then it will be the biggest challenge for trade,” he added.

“The shortage of diesel for transporters and infrastructure issues are slowing down the port operations in Colombo,” Mr Vaswani told The Loadstar. “The shipping lines are, therefore, exploring other options, including diversion of cargo from the east coast to the west, to try and help the situation.”

According to industry estimates, Colombo handles some 40% of Indian transhipment cargo and any disruptions there cause a ripple effect on Indian container trade, making it harder for cargo interests in the region to find other solutions, particularly when vessel capacity is so tight.

“Sri Lanka is a transhipment port and it will not be easy for shippers to opt for alternative routes as those may not be feasible for international trade,” said Sanjay Bhatia, co-founder of digital forwarder Freightwalla.

Indonesian intra-Asia carrier Samudera has earmarked $150m for capex this year, which will include acquisition ...