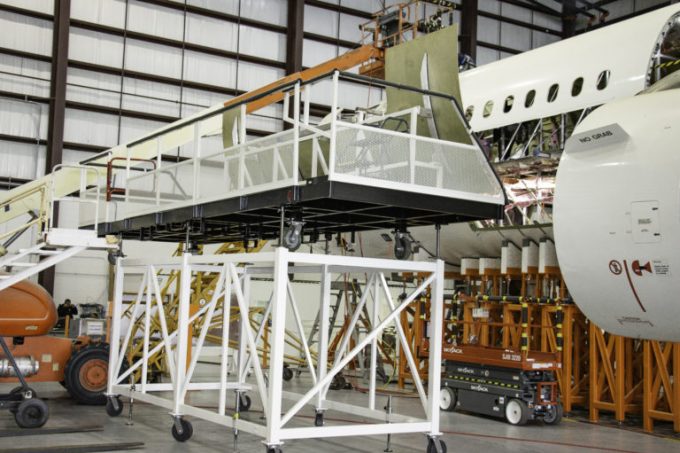 ATSG sees heightened potential to offer services to e-commerce companies in Asia through its A321 conversion business.

Chief executive Joe Hete told investors the group saw opportunities in the A321 freighter market in China, rather than the US.

“People always talk about Walmart for example, but Walmart has such an expansive service distribution network that it’d be difficult,” he explained. “And as far as I know they don’t do a darn thing by air today.

“I think you have to start looking around the globe to find other opportunities. Certainly Amazon … in Europe could be one.

“You could get into Asia, for example, but our ability to operate there is pretty limited. But certainly it would be a potential outlet for leasing aircraft there, especially something like the A321.

“One of the reasons we like that airplane is its great cubic capacity, much better than the 737-800.

“If, for example, Alibaba or something like that sets up a network in the Asian sector, that would certainly be a great location for the 321, because right now a bunch of the things that they do in China, for example, is point-to-point as opposed to hub-and-spoke.”

ATSG has a joint-venture with Precision on A321 conversions, and it aims to get certification in the second half of the second quarter of next year. Tests will start in the “first part of the year”.

One of the challenges, however, will be feedstock, Mr Hete explained.

“We’re always on the lookout for feedstock. But right now, when you think about things like the 737 MAX being grounded, a 321 is an equivalent lift – actually a little bit more. But that’s going to hold feedstock availability down.

“We’re talking to a number of customers. Obviously we can leverage the 321 from the perspective of buying aircraft, converting them and leasing them out ourselves.

“We can leverage it from the standpoint that we’re part owner of the ultimate supplemental type certificate … so we’d share in those proceeds as well.”

He added that if the conversion was certified in the second quarter, the company might be able to add “a couple more aircraft”. But he said it was unlikely to be “a big production line until probably the latter part of ’21 and ’22”.

ATSG’s results contrasted rather sharply with Atlas Air’s. There were increased numbers across the board – including in capital expenditure. Adjusted ebitda from continuing operations was $109.2m, up $35m, or 47%. Capital spending for the first nine months was $336.9m, up 57%, owing to the acquisition of nine 767s.

And, unlike Atlas, ATSG’s relationships with labour seem to be under control. While negotiations on the collective work agreement are continuing, Mr Hete explained: “Performance remains at the usual high level. So things are on an even keel there.”

And despite industry concerns over a pilot shortage, Mr Hete said: “We’ve had no difficulty attracting pilots to date with ATI, because of the great opportunities … we’re able to put butts in the seats, so to speak.”

But he warned there were shortages in other areas.

“Probably the bigger driver is on the maintenance side, as you have to add technicians depending upon whether you’re using an existing location to run that airplane through, or a new location.

“As to all the talk you hear out there in the industry about pilot shortages, I’m here to tell you that I think there’s a much more acute shortage of qualified maintenance technicians. And of course if you can’t fix an airplane, you don’t need a pilot to fly it.”

You can read or listen to the earnings call here, and see the results here. There is further analysis on ATSG on Loadstar Premium.