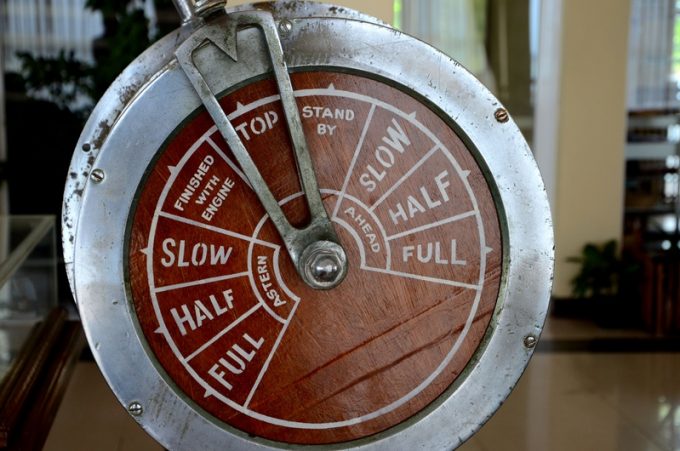 A new survey by VesselsValue has found a “significant increase” in the average speed of containerships.

The maritime valuation and market intelligence service said average laden containership speeds had increased by 5.5% since last June to 14.76 knots, and by 8.5% in the larger sectors.

Report author Olivia Watkins said there was a direct correlation between increased speeds and charter hire rates, which, for 8,500 teu ships, had increased by 350% during the same period, as fuel had become a much lower percentage of operating costs.

It follows that charterers are more concerned about paying for an extra day’s hire at highly elevated levels than conserving fuel, and are instructing masters to make the best possible speed rather than economic speed.

And, on liner trades, evidence is beginning to emerge that carriers are abolishing some of their slow-steaming instructions, asking ships to ‘speed up’ to meet berthing windows, as well as increasing average speeds on backhaul routes to prioritise deadheading of empty equipment.

“Captains had to go through so many hoops previously to get approval to increase the speed of their ships, other than for safety reasons, but now many of them have carte blanche to put their foot down to make berthing windows and tides,” said a carrier contact told The Loadstar.

Indeed, Maersk said last week it was “speeding up its network” to mitigate the impact of port congestion.

The company, which posted a record $2.7bn profit for Q1, was unsurprisingly quite relaxed about increased charter hire, port and fuel costs, given a 35% leap in its average freight rates.

Container shipping first adopted slow-steaming in 2007 against a backdrop of fuel costs which had spiralled to around $700 per ton – they currently stand around $500.

It has been calculated that an ULCV can save over $2m in fuel costs on a single Asia to Europe trip by slow-steaming – in addition to the lower emissions from burning less fuel.

Slower sailing times also helped the industry to soak up chronic overcapacity by the need to deploy extra ships on loops.

Meanwhile, although the economic case for fitting scrubbers to containerships remains strong, with low-sulphur fuel oil (LSFO) at some $100 per ton more expensive than HFO (heavy fuel oil) which can be consumed by scrubber-fitted ships, the take up for retrofits has now slowed to a trickle.

Carriers are deploying every ship they can to meet demand and to take advantage of the very high freight rates, and they cannot afford to take ships out of service for several months for scrubber retrofitting. As a consequence, scrubbers are mostly only being fitted to ships under construction.