News / Battle is on for widebody freighter market, as the A350F looks to take on Boeing 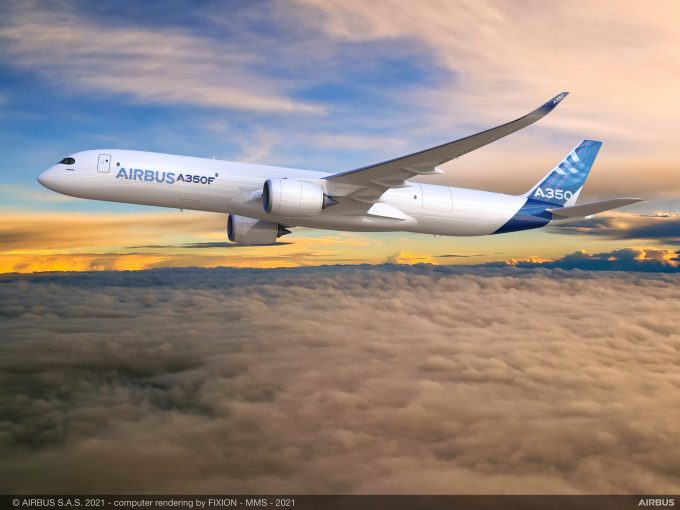 With the first orders for the A350F in, the race is on between Boeing and Airbus for the next generation of widebody freighters.

Airbus, absent from the freighter world for some time, said the development of the new variant was a direct response to customer demand.

It revealed its first orders for the type at the Dubai Airshow last week after Air Lease Corporation (ALC) committed to seven A350Fs and, just days later, came a second order for four A350Fs from shipping line CMA CGM.

Sources have told The Loadstar that Ethiopian may also be considering an order for the aircraft, while Cargolux and Atlas Air have said they were exploring Airbus’s option.

According to Airbus, the type offers the same volume as a 747F, three tonnes more payload than the 777F and more range, as well as low maintenance costs and emissions.

CMA CGM said the A350F would “fit seamlessly” into its fleet of Airbus freighters that includes four A330-200Fs. But it will also add two 777Fs from spring next year.

The A350F and 777F compete directly, with observers suggesting that it would be more logical for CMA CGM to offer a single type. However, the key issue will be timing, with the 777Fs arriving at least three years before the A350Fs. And, according to one observer, “it’s possible that CMA got a really good deal from Airbus, to stop it ordering any more 777s”.

With the addition of A350Fs, the group hopes to accelerate the development of its air cargo business and boost its environmental credentials.

Airbus claims that, in the large freighter category, it is the only new-generation freighter ready for the enhanced 2027 ICAO CO₂ emissions standards, a rule pivotal in the new freighter market.

The new standard will apply to aircraft designed from 2020 and any aircraft in production after 2028, unless “their designs are sufficiently modified”. Hence the need for the 777XF. But older freighters can continue to operate.

With the last four 747-8Fs off the production line going to Atlas Air, Christopher Karp, a cargo expert from the network and fleet management solution group at Lufthansa Consulting, is certain cargo capacities will move towards more economical twin-engine widebodies.

He said once the current wave of 767, A330 and older 777 freighters dwindled in numbers, the long-haul market would be dominated by current conversions like the 777-300s, the 777XFs and new A350Fs.

“Since the capacities are equal, you can likely expect them to fly the same routes as the current-generation freighters do now,” said Mr Karp.

Currently, the 777F, a derivative of the 777-200LR, still reigns supreme as the longest-range twin-engine freighter.

For the nine months ending September 2021, Boeing generated orders for 36 777Fs and delivered 12 to integrators, including FedEx and DHL, and to airlines such as China Airlines, Lufthansa Cargo and Qatar Airways Cargo – all potential buyers of the 777XF.

Boeing remains committed to its 777F for some time to come, and told The Loadstar that, in today’s market the aircraft was still the largest and most capable twin-engine freighter. It has sold 105 since 2018.

Boeing also said it was evaluating future freighter needs, including the 777XF, and continued to engage with current and potential customers on how to best meet their long-term fleet requirements.

Jon Whaley, senior aviation analyst at aviation consultancy IBA, noted that the current generation 777F had proved to be a popular type among cargo operators around the globe, especially as the 747-8F programme ends.

“The largest active freighter programme will be those converting 777-300ERs,” said Mr Whaley. “When looking at the 777F operator base, this provides a good basis for seeing what the operator base will be like for the next generation of widebody freighters.”

In fact, 777 conversions are gaining momentum, with Cargojet announcing that it is the launch operator for Mammoth Freighters’ initial 777-200LRMFs.  Cargojet has additional options for two 300ERMFs and two more 200LRMFs.

Interestingly, Lufthansa Cargo just retired its last MD-11F, all replaced by 777Fs, and industry data shows the airline had 11 777Fs in active service in September. In addition to economic and environmental credentials, the 777Fs give Lufthansa additional load: MD-11 at 90 tonnes, compared with the 777F’s 102 tonnes.

Lufthansa Cargo said it was constantly monitoring the market regarding potential future freighter types. This includes the A350F and the 777XF as likely future intercontinental freighters.

“Based on their size and range, they would likely serve a similar network as today’s 777 freighters,” added the carrier.

The UK government-funded FlyZero project is eyeing hydrogen as the main driver of carbon-neutral passenger ...