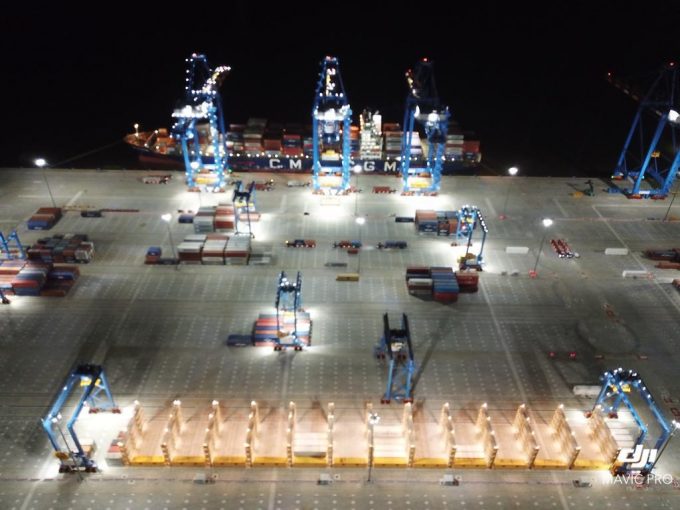 Following a series of test calls, the new Côte d’Ivoire Terminal in Abidjan officially marked its operational and commercial go-live on November 2nd in the presence of port authorities and other local stakeholders. The first vessel to be officially operated on at the terminal was a 267 metre-long CMA CGM ROSSINI, with a total capacity of 5770 TEU.

The official launch of the second container terminal in Abidjan – a joint venture between APM Terminals and Bolloré Ports, comes after successful test calls carried out in mid-October. Bringing the new terminal facility to the Ivoirian and West African market is an important milestone, as the new facility is expected to facilitate increased trade between Côte d’Ivoire and the sub-region, as well as strengthen and bring new dynamics to the existing  Côte d’Ivoire-Burkina Faso-Mali logistics corridor.

Achieved thanks to a total investment of approximately 900 million EUR, including approx. 510 million EUR for groundwork infrastructure financed by the Port of Abidjan and 400 million EUR for the superstructures, this new terminal with an area of ​​37.5 hectares, a 1100 metre-long quay and 16 metres of draft, fully digitalized and equipped with all electric equipment, will be able to handle 1.5 million TEUs (twenty foot equivalent units) annually. This new facility also features several innovations, including automated gates and an online truck appointment system that significantly speeds up pickup and delivery of containers and improves safety of the process.

“Côte d’Ivoire Terminal is a real source of satisfaction for us. For two years, we have worked tirelessly to build this facility, in order to provide the Port of Abidjan with an infrastructure that meets international standards, capable of supporting traffic growth while preserving the environment”, commented Koen De Backker, Managing Director of Côte d’Ivoire Terminal.

“We are proud of the completion of this major project, which will contribute to repositioning the Port of Abidjan in the long term as a benchmark logistics platform on the West African coast. I congratulate the teams of the Port Autonome d’Abidjan and Côte d’Ivoire Terminal for having worked together to carry out this important project”, said Hien Sie, Managing Director of the Port Autonome d’Abidjan.