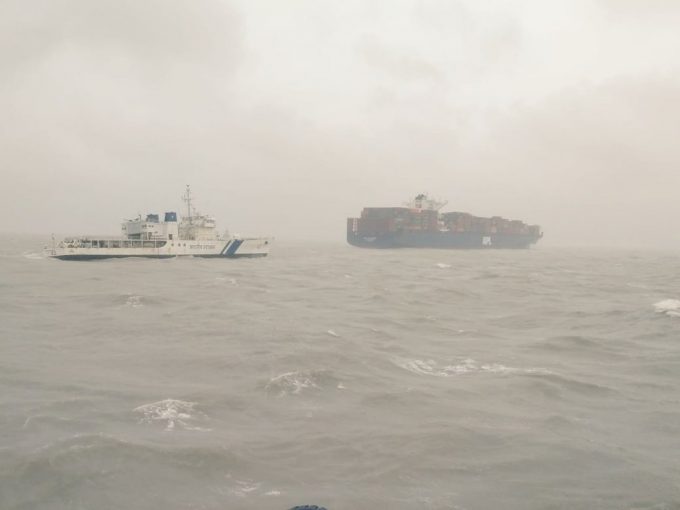 Fire has swept through several containers aboard the APL Le Havre just days after carriers announced they would impose heavy fines on misdeclared dangerous goods.

The Ministry of Defence in Gujarat State said fire had forced a diversion of the 10,100 teu vessel on Friday night, after it left Karachi en route to Mumbai.

Reports claim six boxes were involved, with the Indian coastguard resorting to flooding the boxes after early efforts to tackle the blaze were hampered by heavy weather.

The fire was brought under control after four hours and the next task is to determine the damage caused to the 10,000 teu vessel.

No injuries have been reported among the 26 crew members aboard the Singapore-flagged vessel, although APL has yet to release a statement on the incident.

This is the latest in a stream of box ship fires, with the TT Club pointing to “a worrying trend” amid claims that one hits every 60 days.

Last week, The Loadstar reported that Evergreen, Hapag-Lloyd and OOCL would be imposing fines ranging from $4,000 to $35,000 for misdeclared shipments.

The move was welcomed from all corners of the industry, with risk management director at TT Club Peregrine Storrs-Fox telling The Loadstar: “We welcome such initiatives, following a spate of fires and growing concerns about cargo packing.

“We have been collaborating with stakeholders through the supply chain to highlight the risks arising from poorly packed and misdeclared cargo.”

Hapag-Lloyd, which suffered a high-profile fire, caused by misdeclared cargo, aboard its vessel Yantian Express this year, said it would impose a $15,000 fine per misdeclared box, and OOCL has announced enhanced checks and a hazardous cargo misdeclaration fee.

Forwarders too have been largely pleased by the decision of carriers to play a greater role in trying to mitigate incidents which have cost the lives of several sailors.

One forwarder told The Loadstar most of the issues stemmed from a “relatively” small number of rogue shippers, and that the fines would help “weed out these bad apples”.