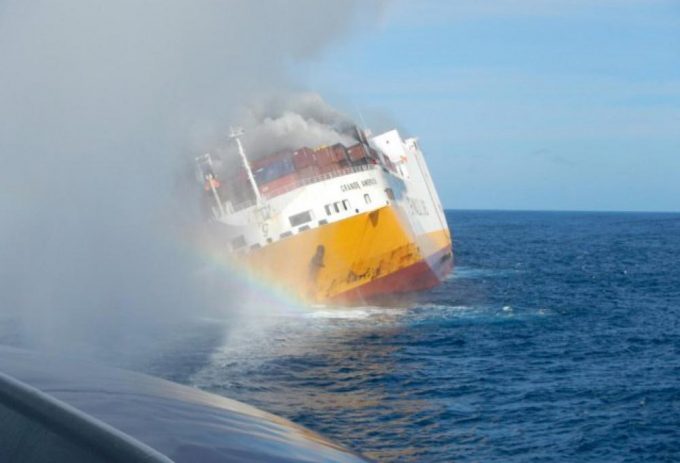 Fire hit a Grimaldi ro-ro/container vessel en route from Hamburg to Casablanca on Sunday, causing the crew of 26 and one passenger to abandon ship.

The 1997-built Grande America, which has a container capacity of 1,300 teu, caught fire in the Bay of Biscay, approximately 150 miles south west of Brest late in the evening. At around 2am yesterday, the master took the decision to abandon ship.

Fortunately, the British frigate HMS Argyll, returning to its home port of Plymouth, was in the area and responded promptly to a mayday signal.

In very heavy seas, with the ships rolling at 30 degrees, the frigate managed to launch its sea boat and Royal Marines succeeded in rescuing the mariners from the Grande America’s lifeboat, which had been damaged as it smashed into the raging sea.

The crew and passenger received medical care onboard the HMS Argyll and were later transferred to Brest where some required hospital treatment, although there are no reports of serious injuries.

The fire apparently started in one of the deck containers and quickly spread to surrounding boxes, despite the efforts of the crew to extinguish the blaze.

The blazing vessel continued to drift towards the French coast before the arrival of salvage tugs.

The French authorities demanded that the vessel’s owner take “all necessary measures to stop the danger” posed by the stricken ship and to agree without delay to a contract for assistance, commonly used in such casualty situations and known as the Lloyd’s Open Form (LOF).

The Grande America is deployed on the Italian family-owned shipping group’s North Europe-West Africa Southern Express service and, after calling at Antwerp on 28 February and Hamburg on 8 March, sailed for Dakar, Senegal and Conakry, Guinea, with ETAs respectively on 15 and 17 March, and was apparently due to make an inducement call at Casablanca.

There have been a number of major container fires in the past year, including the 15,262 teu Maersk Honam on 6 March last year, the 7,500 teu Yantian Express on 10 January this year and the 9,200 teu APL Vancouver on 31 January.

General Average was declared on all three casualties and appears certain to be declared on the Grande America, causing considerable delay and cost to shippers of surviving cargo.

In the case of the Yantian Express the vessel is still discharging damaged containers at its Freeport safe port terminal, two months after the blaze was contained. THE Alliance members Hapag-Lloyd, ONE and Yang Ming said this week cargo operations would take a further five weeks.

Moreover, the carriers said that “they were not in a position to discharge sound cargo at the vessel’s current location” and that furthermore other terminals in the vicinity “may not have sufficient capacity”, leaving shippers in the dark about when they could expect to see their cargo.

In the meantime, cargo interests are required to post GA and salvage security “so that their cargo can be released in a timely manner”.

Administration costs connected to GA can be as high of 25% of the final total, which in itself can involve shippers paying over 100% of the CIF value of the goods to recover them.

The APL Vancouver, which was towed to Singapore after the blaze was extinguished, is due to complete cargo inspections this week.