This a key milestone on the road to positive FcF generation next year, which “remains the target” for the US-based 3PL owned by Apollo, chief financial officer Peter Waller told The Loadstar in an interview today.

“The third quarter was another good quarter,” Mr Waller insisted, “with top-line growth, much better working capital management, and much improved cash flows. So, we are pretty pleased.”

This is the first time that core FcF – which can used to pay down debt as well as for other financing and investing activities – was positive since Mr Waller was appointed as chief financial officer in October 2016.

(Note for the reader: FcF is the main value-driver with this corporate story, because as CEVA continues to look for a buyer, it must prove its operations are properly managed and its cash flow profile is sound. As a reference, the last time CEVA reported positive recurring FcF after financing costs and capex, or core free cash flow, was in the fourth quarter of 2014, and that excludes its performance in the fourth quarter last year, which is not comparable on a recurring basis due to the reversal in net working capital, CEVA told us.) 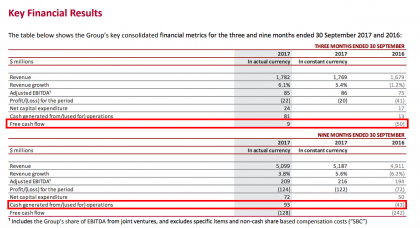 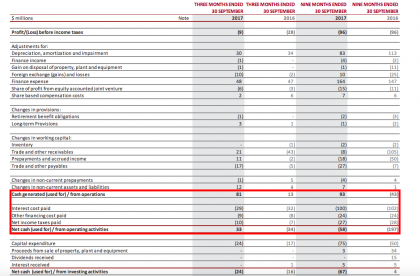 On a cash flow basis, its performance was even more remarkable “if you consider the improvement over the past nine months”, which were characterised by a rise in adjusted ebitda and core cash flows, despite challenging market conditions, particularly in air.

“There is pressure on ocean, but much more on air… for the full year, and even more in the third and fourth quarters,” Mr Waller said.  “It’s a very volatile environment, with rates up tremendously due to a shortage of capacity.

“From our perspective, trading conditions in air are difficult, and the fourth quarter will be even more difficult than previous quarters, but our ‘excellence programme’ makes me feel quite optimistic about the period.”

Mr Waller would not disclose the projected target for working capital intensity as a percentage of revenues, but claimed the company could improve it significantly.

While revenues rose in the first nine months, so too did costs of third-party services (labelled in the P&L as “work contracted out”), which outpaced top-line growth by several percentage points, impacting gross profits.

This is a common problem in the freight forwarding industry, but CEVA appears to be coping well while managing to keep a lid on personnel costs and other operating expenses, which fell on a comparable basis, helping the company grow adjusted operating income and, subsequently, core cash flows.

“Operating costs are down $40m in absolute terms, and we have reduced that while growing the business.”

“As you grow contract logistics, for example, you need more people, but we have reduced costs on a like-for-like basis for staff and other expenses.” 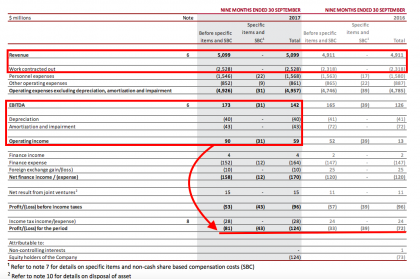 The operational breakdown (see tables four and five below) shows that the freight management (FM) unit grew at a steeper pace than contract logistics (CL) activities, although more profitable volumes remain challenging at the former.

Further margin dilution in certain areas (see tables six and seven below) cannot be ruled out on a consolidated level, which again is a problem that all the main players in the freight forwarding industry face through to 2018.

Mr Waller said: “We already had that for the year – peaks can be tough but we are prepared to face continued margin pressure.”

Before certain adjustments, economic losses widened in the third quarter and in the first nine months of the year, but net earnings “do not reflect the actual performance” of CEVA, as there are charges which are one-off and non-cash in nature.

The other aspect worth considering, Mr Waller argues, is that tax considerations also impacted the bottom line, which remains a much less effective metric than ebitda, which is on its way up. In short, for the time being, investors as well as trade buyers should focus on other metrics, such as ebit, ebitda and cash flows.

As far as its weighted average cost of funding is concerned – net debt, defined as total principal debt less cash and cash equivalents, was $2.15bn as at 30 September 2017 (31 December 2016: $1.95bn and 30 September 2016: $2.1bn). Mr Waller noted that an appropriate figure would be between 6% and 7%, so there is an obvious opportunity for would-be suitors after interest rate arbitrage (replacing high-yielding liabilities with cheaper debt) now that, at least operationally, CEVA is on the right path to become a leaner entity.

“First, in any exit strategy, you would reduce the leverage and the total debt, and we just recently extended the US ABL [asset-based lending] facility from December 2018 to August 2020 at the same rate,” which proves CEVA has more cards to play before it is taken over, Mr Waller said.

“And then if you look at our bond prices, they have strongly improved this year and now trade several percentage points higher than previously, so the yield we would have to pay has come down.”

Under various exit scenarios, a new owner essentially would pay down some of the outstanding debt with new equity, thus securing a much lower cost of funding.

“That is what we are working towards – improving the business, core profits and cash flows to achieve an exit either via a sale or an IPO,” Mr Waller said.