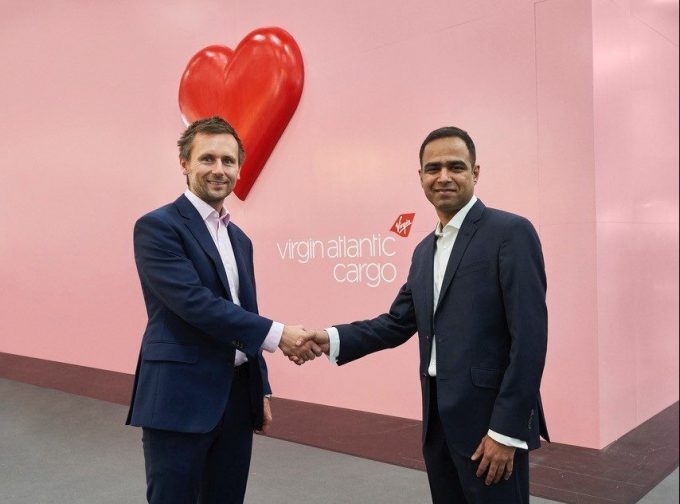 Booking capabilities were high on the agenda of airlines this week at Air Cargo Europe in Munich.

Booking platform cargo.one announced that AirBridgeCargo (ABC) and Cargologicair (CLA) had joined, while rival Freightos announced that IAG Cargo had signed up to its WebCargo platform, which will use the carrier’s digital APIs.

“ABC and CLA have added lots of capacity, and are in very important trade lanes, as well as having maindeck capacity.” He added that the market had started to recognise cargo.one and its potential now.

“It’s not so much us knocking on doors any more. But we are still looking for more airlines, as we need to get to that scale. ABC is a game-changer, but we already have great networks via Lufthansa and Finnair.”

Other airlines are certainly looking at platforms.

Head of Virgin Atlantic Cargo, Dominic Kennedy, said that the carrier “would engage” with the “disrupters”.

“We will talk to our customers about the best way to interface with them,” he said.

For now, Virgin has its own platform to implement. It announced on Wednesday that it will become the first carrier to implement Accenture Freight & Logistics Software 8.0, which will replace its decade-old Voyager system, when it goes live in the first quarter. Once operational, customer systems will be able to interface directly through APIs and connect with Virgin’s platform for pricing, bookings, allocations and operations. The software will enable online customer service; an alignment of revenue management processes around routes, capacity, costs and rates; real-time visibility, and seamless syncing with its partners.

“We have been thinking long and hard about the next five years,” said Mr Kennedy. “We needed to think about the technology. A number of things are really critical for us, and fundamental change was needed so that customers could enjoy the benefits.”

He added that another requirement was to ensure the technology would cater for “our evolving partnership network”, with Delta and Air France-KLM Cargo.

“We will expand it to AF-KLM, based on customer choice – subject to receiving regulatory approvals and anti-trust immunity from the US Department of Transportation,” he said.

External booking platforms would come next, he explained. “The focus now is on getting a digital process, with stage two being a host-to-host capability on customer platforms.”

American Airlines, meanwhile, said it was also looking at booking platforms – but was concerned about the business model.

“I am very curious,” said Rick Elieson, president cargo. “At the moment, I don’t know. As an industry we have a distribution problem, especially for smaller forwarders.

“Both the cargo.one and Freightos platforms are interesting, and it makes me curious to know more about their commercial models and how it will affect the industry. What is their data model? Data is really valuable – so how is that going to play out? What is the platforms’ role, and how will they monetise it? I don’t want there to be secondary markets. And who reaps the benefits – the customer or the distributor? That’s my concern. I don’t want long-term negative effects on the industry.

“Do we love transparency on the distribution side? It’s not all good. And there is the potential to create a more competitive environment.”

Cargo.one now has 253 forwarders signed up to use its platform, a mixture of both larger ones and SMEs, said Mr Claussen. And the team is growing, with the start-up recruiting from the tech, carrier and forwarding professions, and employing a wide range of nationalities. “We are like the UN,” he said. “That helps us to innovate – more diverse teams create more innovation.”

The start-up team did manage to catch the eye of Virgin Atlantic Cargo in Munich, with a little ‘gorilla marketing’. They kidnapped Virgin’s prized gold gorilla, and held it hostage for the ransom of a model airplane. Virgin responded – kidnapping cargo.one’s Scaletrix from its stand.

Except … it wasn’t cargo.one’s. It was, in fact, owned by the neighbouring stand, which took a little while to see the funny side. 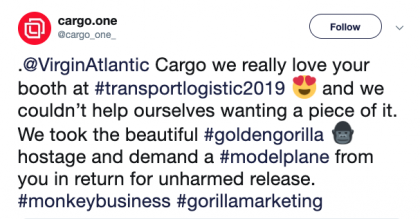 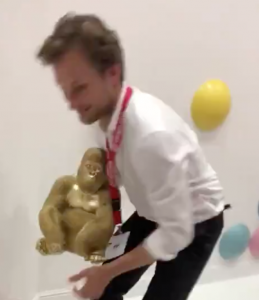 ZS: 'Freightos is going public…and how we got here'

Zvi Schreiber, CEO of Freightos, wrote on 31 May: Today we’re excited to announce that (drumroll…) ...