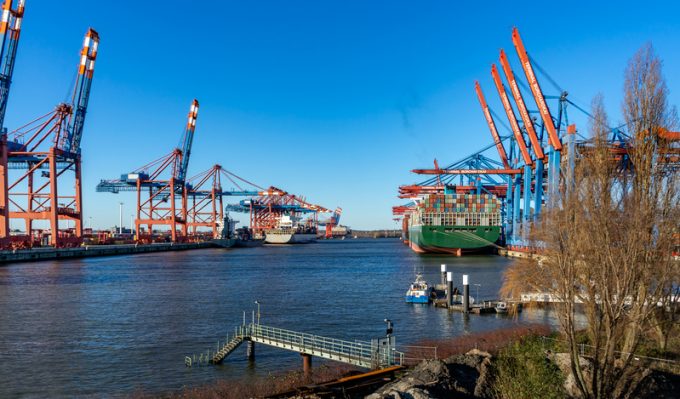 HHLA and Eurogate terminals face each other in Hamburg © Kay Fritsch | Dreamstime.com
By Mike Wackett
01/06/2021

The 2M partners, Maersk and MSC, advised customers today their AE7/Condor Loop 4 would omit Hamburg for the next four weeks to discharge cargo at Bremerhaven.

The Danish carrier said it had made the decision “as a result of high yard density and exceptional waiting time for our vessels in the port of Hamburg”.

And MSC referred to “a severe congestion issue” at Hamburg’s Eurogate Terminal, which was “impacting schedule reliability and causing delays to shipments”.

Both carriers confirmed discharge of the cargo at Bremerhaven would constitute “end of carriage”, as per their respective bills of lading. According to eeSea data, the 2M’s Loop 4 deploys 10 ships with an average 17,916 teu of capacity.

This will mean extra haulage costs for shippers that were expecting to collect their containers at Hamburg, but MSC said it was “not in a position to accept liability” for any additional costs as a consequence of the diversion.

A carrier contact told The Loadstar he suspected it was “a shot across the bows” for Eurogate to exert pressure on the terminal’s management.

“In the old days, carriers would not dare to dump Hamburg cargo at Bremerhaven without any compensation offer, but now they can get away with virtually anything and shippers have little or no say,” he said.

It is also understood that road access disruption by Extinction Rebellion climate activists in the past week have added to the congestion problems at Hamburg’s container terminals.

The news of the 2M diversion comes as the port of Hamburg was anticipating higher volumes from the first stage of the introduction, at the beginning of May, of its new navigation channels and vessel passing box.

Vessels entering and leaving the river Elbe can now benefit from around half of the 1.9m of extra draught from the deepening programme estimated to allow ships to bring an extra 1,000 containers into the port.

“After the second and final stage of clearance in the second half of this year, we shall be able to fully exploit the draught improvements,” said Jens Meier, CEO of Hamburg Port Authority at last week’s first-quarter results announcement.

Hamburg reported a year-on-year 1.8% increase in container throughput across its box terminals in Q1, to 2.2m teu, which included a 16% rebound of traffic with its largest trading partner China, to 672,000 teu.

And it predicted a positive outlook for the remainder of 2021.

“With the resumption of suspended liner services, and some new ones, and in a situation we hope will be improving worldwide, we expect throughput figures of 130m tonnes and 8.7m teu,” it said.

Elsewhere in North Europe, container ports are bracing for a second wave of high demand from full ships and extra loaders, with vessel schedules mostly bearing little relationship to those advertised.