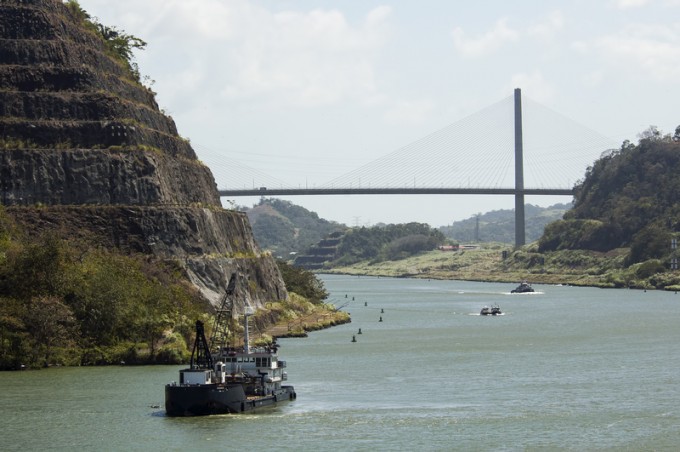 Despite the impending break-up of both the G6 and CKHYE alliances, both have announced plans to launch Asia-US east coast services, deploying neo-panamax vessels.

In preparation of the forthcoming opening of the Panama Canal’s new locks, said to be able to handle vessels of up to 13,000 teu, the G6 has announced the NYX service, linking China with Savannah, Norfolk and New York, employing ships of 9,000-10,000 teu.

And yesterday the CKYHE announced that its five Asia-US east coast services would also transit the canal, and include calls at Evergreen’s hub at Colon, on the Atlantic mouth of the waterway. The services will all employ vessels of 6,500-8,500 teu.

However, the International Transport Workers Federation (ITF) yesterday warned carriers there were increasing concerns about the safety of manoeuvring larger vessels in the new locks.

An ITF-commissioned study, by Brazil’s Fundação Homem de Mar (FHM), concluded that the locks’ dimensions are too small for safe operation (with both gates closed); that there are no refuge areas for tugboats inside the locks, leaving no room for failure (human error, miscommunication, broken lines or engine failure); that the bollard pull is insufficient and, as a result, manoeuvrability of the vessel was compromised in the locks under the average environmental conditions in Panama. In milder conditions the exercise was concluded safely, it added.

ITF said it had commissioned the study due to the “Panama Canal Administration’s (PCA’s) refusal to engage in dialogue on matters such as training, as well as the technical and construction issues that have led to delays in the operation of the new infrastructure”.

Speaking at the launch of the study in Panama City, ITF general secretary Steve Cotton said: “I wish I could report that the study gave the new locks the all clear. Sadly, I can’t.

“Instead we face a situation where those working on the canal, and those passing through it, are potentially at risk.

“The study was based on the PCA’s original plan to use one forward tug and one aft tug. We understand that compensatory alternatives are being examined, which we welcome.”

FHM employed Manoeuvring Simulator Class A to recreate the new locks, and modelled the arrival of a neo-panamax vessel and the tugboats that would assist its manoeuvres. A video of the exercise can be seen here.

“Those who’ll be working these locks have to be brought into the process, while there’s still time to fix the defects,” Mr Cotton continued.

“We believe that this is an issue where there is common ground with shipowners, insurers and others in the maritime industry, so we will seek to engage them in the discussions and strategies for improvement in this crucial area, and may also consider updating the simulation to cover new manoeuvring alternatives in co-operation with the PCA, as well as other shipping industry representatives.”

The G6 is also set to increase vessel size on one of its all-water loops via Panama, the PA2, which will be upgraded to 6,000 teu ships.

As a result of the increased capacity, two of the G6’s all-water loops that use panamax vessels – the NCE and the SCE/NYE – will be closed, and Alphaliner said “overall capacity deployed by the G6 carriers on all-water services will remain roughly the same as last year”.

Although a major shake-up of carrier alliances is expected, the alliance partners added that their existing grouping would remain in effect until April 2017.

Covid-19 has exacerbated many things – and the driver shortage is one of them. With driver ...

'Enough is enough', says ITF – we will now help stranded seafarers get home

'Governments must do more to support struggling hauliers', call

UK and international logistics representatives have called on governments for urgent injections of cash into ...