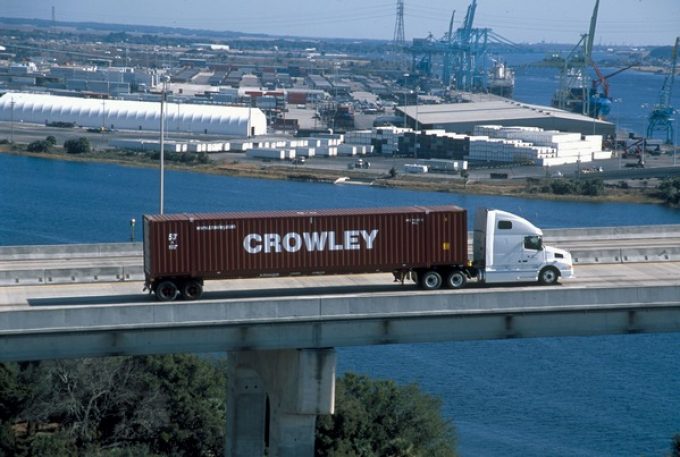 And in an opportune move, venture capital-backed start-up Dray Alliance, based in Long Beach, has announced a new app for truckers operating in the container haulage sector.

It said: “Dray Alliance has developed a software platform that provides complete container management, including automated status notifications, real-time GPS tracking and document management and analytics for every container.”

Dray says it has understood the logistical complexities: “Bottlenecks and logjams at ports is due to truckers, port terminals and other stakeholders co-ordinating inadequately with analogue systems and emails.”

It is a timely development for an industry that says it has a “data hole” caused by a lack of standardisation, industry figures told the FMC.

At the first FMC Data Initiative meeting, commissioner Carl Bentzel said the shipping business had changed over the past 30 years, from a fragmented business, with no line securing more than 4% market share, to one with only around 10 significant players – half of them having secured market shares of 12%-20% through three major alliances.

“A ship calling at LA [today] would have a line of back-to-back containers stretching to Las Vegas,” he said, adding: “We can get cargo across the ocean and into the terminals, the challenge is to get it to its final destination.”

Michael Caney, EVP of Port City Logistics, which operates on the east coast, at Savannah and other facilities of the Georgia Ports Authority, said: “Every port has unique challenges, we have a skilled labour problem.” But, he said, the major headache for the business was collecting data from a variety of sources, as “all companies’ systems are very different”.

He said he needed some simple data on when a box would be ready for collection.

“We need the vessel name, when it will arrive and where it will come to; and if there are any changes, let me know.”

Basic data was what was needed, agreed president of Gulf Intermodal Will Connell, adding there was a need to get the daily charges a box may attract while at the port.

He also said it was necessary in the current climate to know the last day he could deliver a box and whether there were any chassis available, by size.

Due to the poor data flow, a driver may arrive with an empty only to find an expected import box had not arrived, or went to another port or terminal.

“At the moment we pay people to track ships,” claimed Mr Caney.

A number of speakers said they were reduced to scaping data from various websites to try and get the information they needed, which was time consuming and often inaccurate.

VP of the Washington Trucking Association Eric Wright said in his view there were two types of data necessary, transactional and operational; the latter the most problematic.

“Truckers don’t operate from point to point,” he said, so when a constraint is put in place, such as an appointment system, it created problems.

“Matching chassis to container availability and drivers is complex,” Mr Wright said. And that was made more complex, he added, because “the lines consider a box released whether a chassis is available or not”.

On the transactional side, Mr Wright believes there is a long list of potential data points, such as fees, dates and timings of freight availability, but he said “there is a lack of a standard and the ability to link to the data”.

Standardisation was the key phrase throughout the discussion.

“We need a standard data set [nationwide] that the FMC says lines must allow for drayage operators to pull data, with updates to customers through email,” said Mr Connelly.

Operational standards needed to be set by each gateway, because each port and terminal is different, argued Mr Wright, “but the data is the same”, he added.

The group agreed the US was in critical need of an agreement between lines, terminals and truckers for a standardised data system that could be applied nationwide.

Mr Bentzel said the FMC had “heard the industry’s call”.

The US Federal Maritime Commission (FMC) says there is increasing demand for its services as ...

US forwarder Expeditors has been given an exemption from the requirement to file tariffs with ...