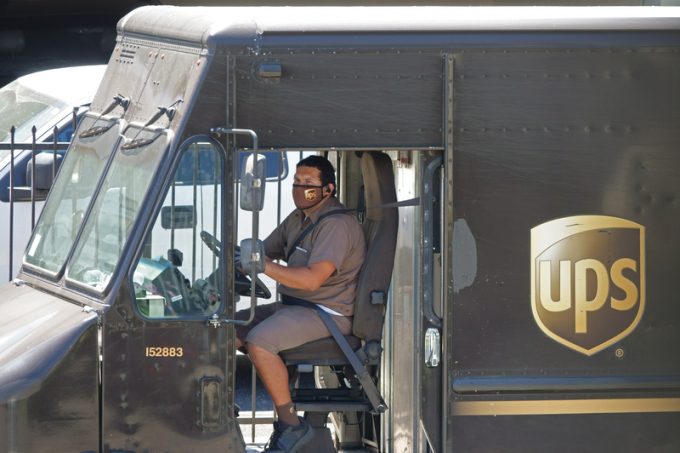 Despite the near implosion of its B2B traffic in March, UPS suffered only mild damage from the pandemic on its balance sheet for the first quarter.

“I think they did fairly well, considering the situation. There weren’t really any surprises,” said Cathy Morrow Roberson, founder and head analyst of Logistics Trends & Insights.

Revenues at UPS actually climbed from $17.16bn a year ago to $18.03bn, driven by gains in domestic parcel traffic and the integrator’s Marken healthcare logistics unit.

The firm’s mid-single-digit parcel growth in the domestic arena obscures radically divergent dynamics – and while B2B volumes declined, due to coronavirus shutdown measures, double-digit growth in B2C traffic catapulted that segment’s share of domestic volumes to 70%.

“I doubt we’ll see that percentage decline very much for the second quarter,” said Ms Roberson.

Kate Gutman, UPS chief sales & solutions officer, pointed to reports suggesting that the pandemic had advanced the rise of B2C versus B2B traffic by four-to-five years.

Predictably, the elevated B2C volumes have been a drag on domestic margins, which sank more than 3%. UPS’s tally of miles driven in the US climbed 10%, while the number of daily stops rose 15%.

Ms Roberson added: “UPS, as well as FedEx which also noted an increase in B2C, will have to focus on reducing residential delivery costs through encouraging alternative delivery locations – lockers, etc – expanding as well as perhaps through incentives.”

Revenue and profit fell in the Supply Chain & Freight segment, which management attributed chiefly to widespread reductions in global economic activity. One bright spot was double-digit growth for its Marken acquisition.

“It will continue to shine for the second quarter, and probably through the end of the year, as will the rest of UPS’s healthcare solutions,” commented Ms Roberson. “They’ve made a significant investment in this vertical and it looks like it’s paying off.”

UPS has joined a growing number of operators that have withdrawn guidance for revenue and earnings per share growth. To shore up its financial position, the company is suspending share buybacks this year and expects to slash about $1bn from its planned capex budget.

However, strategic investments, such as facility retrofits and implementation of new technologies like autonomous vehicles to boost parcel processing capacity, will go ahead, as will measures to reduce transit times.

UPS emphasised that it had managed to support customers with “near-record on-time service”, which could be seen as a dig at rivals. In its more recent earnings call, FedEx top brass repeatedly stressed its faster transit times.

“That ‘near-record on-time service’ was probably not only a dig at FedEx, but also Amazon which struggled to meet Prime delivery times in mid-late March and into April,” said Ms Roberson.