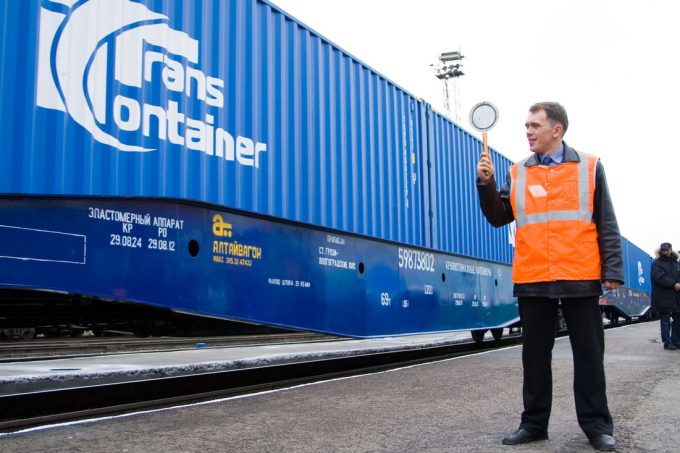 Russian intermodal operator TransContainer today posted year-to-date profits that were up almost 100% on 2016.

The news came amid rumours of an MSC investment in the Russian Railways-controlled unit, which is also partially listed on the London Stock Exchange’s Alternative Investment Market.

This robust growth combined with a strong fleet optimisation programme and a modest rise in operating costs, just 2.5%, to generate profit for the period of Rb5.1bn, which represented a 96.4% improvement on 2016).

The company claimed the improved fleet management had kept key expenses, including empty runs, salaries and administration, under control.

However, it has partially become a victim of its own success, as rapid volume growth in China-Europe container rail services also led to a growing equipment imbalance.

“Empty run ratio for flatcars grew from 3.1% to 4.1% due to persistent misbalances in container flows in the Far East, caused by the fast-growing transit and import flows from China,” a company spokesperson said.

“In October and November, the Russian rail container market has continued its robust growth and over the 11 months of 2017 so far, the market is expected to have expanded by approximately 19%, year on year, exceeding the company’s initial expectations.”

In response, TransContainer has been investing in new flatcars and containers and has continued its process of business optimisation. In September the board approved plans to spin-off its tank container transport business into a wholly-owned subsidiary.

“The company believes the long-term growth potential of the rail container transport market is driven by ongoing rail cargo containerisation,” the spokesperson said.

“TransContainer will focus on further business optimisation, management efficiency, asset utilisation and the quality of customer service in order to increase its attractiveness.”

Just days before the results were made public, rumours emerged that the famously guarded MSC was eyeing a stake in TransContainer, with the Kremlin readying a sale of Russian Railways’ stake. Russian business newspaper Kommersant noted unconfirmed reports that UCL Russian billionaire Vladimir Lisin was ready to acquire the stake from RZD.

Kommersant said MSC – which co-owns a stake in St Petersburg Container Terminal with UCL – was ready to team up with UCL in any deal, claiming a 50% stake in TransContainer was worth $300m.

RZD owns 50%, plus two shares of the company. The remainder of its stock is traded on the AIM.