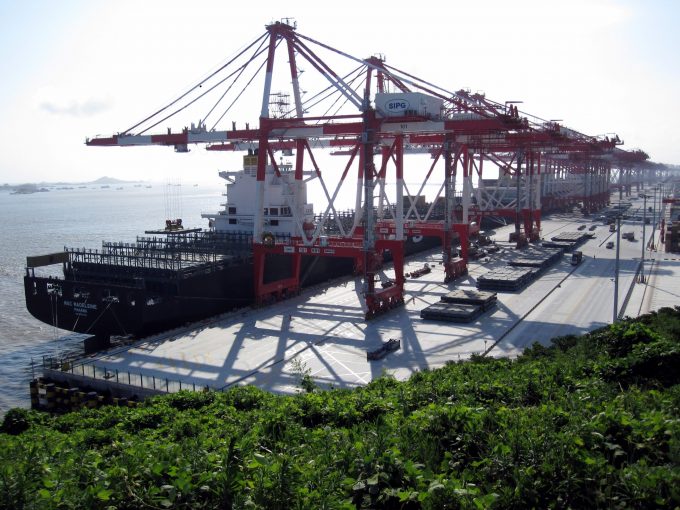 Wu Chungeng, head of public roads, said last week, vessels operated by mainline operators spent an average of 2.02 days in the port, down 44% on year ago and down 2% compared with January and February.

Mr Wu added that ship-tracking data indicated that, overall, vessels spent an average of 0.99 days at berth last week, which while down 12% on January and February, was up 2% on a year ago.

He made no mention of vessel arrival numbers, even as some mainline operators, like Maersk, began skipping Shanghai at the start of April.

However, the claim contrasted with ONE’s latest customer advisory, which alludes to ongoing terminal congestion and limited trucking and reefer yard plug capacity in Shanghai.

“Considering this situation, ONE highly encourages customers to consider a change of destination to alternative ports to prevent delays and/or damage to your cargo, especially for time-sensitive commodities,” said the Japanese carrier.

Containers that cannot be discharged in Shanghai will be diverted to transhipment ports to be stored and transported to Shanghai once the situation permits, it adds.

Since 14 April, Maersk has stopped taking bookings for Shanghai-bound reefers and dangerous cargo.

The company added: “Over-the-road volume in Shanghai continues to be impacted as well, as both deliveries to, and pickups from, Shanghai decreased further over the past week. As of 16 April, the 14-day average over-the-road and intermodal shipment volume leaving Shanghai is down 41%, compared with 12 March, while deliveries to Shanghai are down 72% over the same period.”

Mr Wu stressed that Shanghai port was doing all it could to ease the impact of the lockdown on operations and had deployed 25,000 employees to the port area to implement closed-off management measures, including minimising entrance numbers, setting up checking points, issuing entry permits and registering personnel and vehicles passing through.

The ministry is also co-ordinating with the transport authorities at Jiangsu, Zhejiang and Anhui, the three provinces in the Yangtze River Delta, to “minimise disruption to shipping operations”.