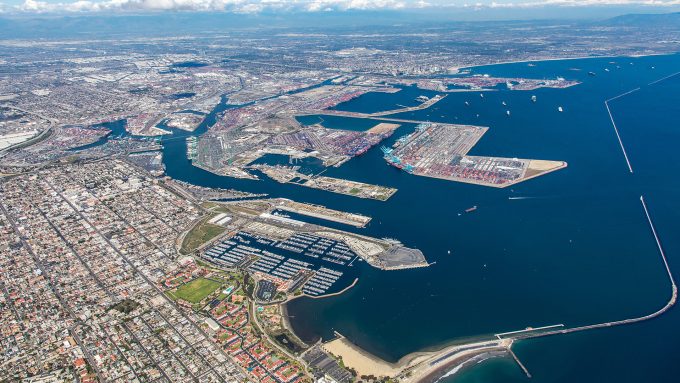 As the number of ships awaiting berths at the US west coast container hubs of Los Angeles and Long Beach grows the ports are set to surcharge ocean carriers for extended import dwell times.

From 1 November, the San Pedro Bay ports will charge carriers $100 per container for import boxes moving via truck that remain on terminals after nine days, and the same charge for rail movements after three days.

And the charge will increase by $100 a day thereafter.

“With the escalating backlog of ships off the coast, we must take immediate action to prompt the rapid removal of containers from our marine terminals,” said Port of Long Beach executive director Mario Cordero.

“The terminals are running out of space and this will make room for the containers on those ships at anchor.”

According to the Marine Exchange of Southern California database, the number of containerships either at anchor or in holding areas for Los Angeles and Long Beach terminals is back over 80, some waiting several weeks to get worked.

Indeed, according to the port of LA’s Signal port optimiser data, although the average wait for a berth at its terminals is 12.8 days, several ships have been idle for much longer. Currently, the most extreme examples are the 1,900 teu Sinotrans Bangkok, waiting 37 days for a berth at the Everport facility, and the 5,023 teu Hyundai Prestige, waiting for 27 days for a free berth at YTI.

The latter is an extra loader deployed by HMM, which is costing the carrier $33,600 a day and has racked up almost $1m in charter hire fees just sitting in the San Pedro Bay.

Other examples include the Cosco-chartered 2,741 teu AS Constantine, which the Chinese carrier took on a three-year charter last month at $39,900 a day and idle for the past 21 days.

Mr Cordero’s counterpart at LA, executive director Gene Seroka, said the terminal complex “must expedite the movement of cargo through the ports to work down the number of ships at anchor”.

He added: “If we can clear this idling cargo, we’ll have much more space on our terminals to accept empties, handle exports and improve fluidity for the wide range of cargo owners who utilise our ports.”

The move at LA and LB to surcharge carriers, regardless of their local free time agreements with the terminals, is supported by port envoy to the Biden-Harris Supply Chain Disruptions Task Force, John D Porcari.

Nevertheless, carriers point to infrastructure deficiencies at the west coast ports as the reason for the delivery delays, and argue that they are already being penalised by the downtime for their ships.

But Lars Jensen, CEO and partner at Vespucci Maritime, says other than to stop sending ships full of imports from Asia, the carriers have their hands tied.

“The core of the problem lies on the land side – a shortage of trucks, chassis, rail infrastructure – all elements largely out of the control of the carriers,” he said before the surcharge announcement.

The accelerating decline of container spot rates is proof of a downturn in the market, ...