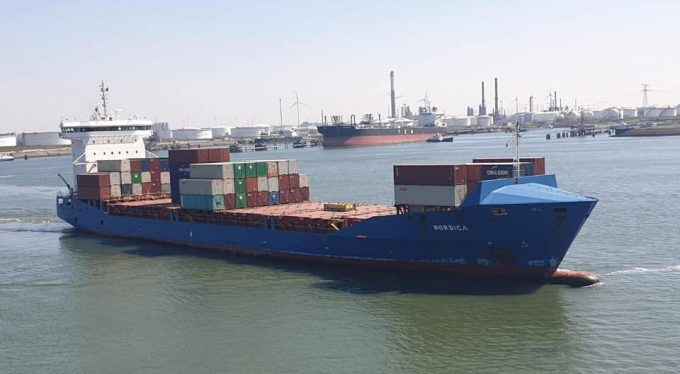 Described by developer Value Maritime (VM) as a “plug and play” system, the onboard storage technology captures CO2 from the ship’s exhaust to charge a CO2 battery, which stores the gas and can be discharged port-to-port and sold to customers sourced by VM.

VM’s Yvette van der Sommen told The Loadstar: “Our first customer is a Dutch rose grower which will use the CO2 as an additional feed source to speed the growing process.

“What makes this solution unique is the way we store it and that the battery can be dropped off at separate ports and replaced with a new battery for the next leg of the journey – the only likely restraint is the shipowner’s desire on how much CO2 to catch.”

Visser Shipping became the first line to take the new capture module, which will be installed on its 1,036 teu Nordica next month.

A spokesperson for Visser said: “This is just the beginning,” adding that it has plans to upscale its use of VM technology as it works towards new climate regulations.

“Weight of scrubber storage concerns us, but VM’s unit is one teu, so we sacrifice some cargo, but it’s limited and we can change when we reach ports,” the spokesperson said.

“We will start with two 20ft boxes and go from there, but the idea is that we can add as many 20ft containers as is required to meet the new environmental regulations, and it addresses wastewater concerns too.”

In terms of efficacy, Ms van der Sommen said many factors affected this, including engine power and cargo load, but said two batteries could capture 10-15% of exhaust CO2.

Environmentalists and shipowners alike seem hesitant over the repercussions of a technology that, in using seawater to clean the exhausts, must subsequently eject contaminated waste water back into the oceans and waterways.

But Ms van der Sommen said VM’s solution included a filter system that cleaned the water before it is pushed out into the sea.

Visser’s spokesperson added: “The water going out is just as clean as the sea water that came in and this, for us, was a key metric in deciding to go with VM’s system, and we have been very happy with what we have so far seen.”

VM claims the Nordica‘s scrubber will be the first installed on a working vessel – although several other operators have also reached the trial stage.