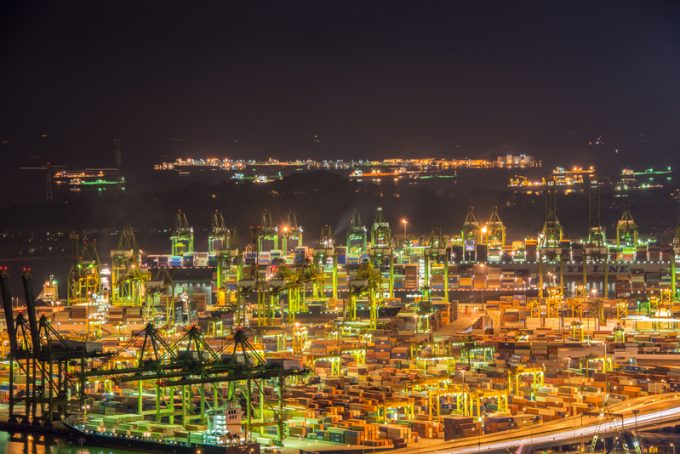 As much as 1.9m teu of cargo is expected to be caught up in the Suez Canal-driven supply chain congestion shortly to engulf many of the world’s largest container ports.

According to new data from supply chain visibility platform Project44, the recent canal blockage has led to a cumulative delay to shipping fleets of 1,072 days.

And the largest ports are expected to bear the brunt of a short-term surge in ship calls as carriers try to get services back on schedule.

According to Project44 data, over 370,000 teu of capacity is currently en route to the world’s largest transhipment hub of Singapore, adding to the 83 vessels – collectively equating to 299,310 teu – already at the port, or anchored and waiting to unload, as of yesterday.

The picture is similar at Rotterdam, where 15 ships, representing 196,600 teu, will arrive over the next week, creating a lengthy queue behind the 85 vessels already at port or waiting to enter.

As ports attempt to clear this mounting backlog, there will also be an impact on liner schedule reliability, with port delays measured in days also on the rise, and Project44 calculated that delays on the Shanghai-Rotterdam trade had risen to seven days, compared with 2.79 days this time last year.

And with this potentially unprecedented build-up of cargo at box terminals around the world, insurers have warned it is likely to affect the entire container supply chain and increase the risk of freight crime – particularly theft.

Director of loss prevention at the TT Club Mike Yarwood explained: “Beyond the delay to cargo on board those ships affected, there will inevitably be a knock-on impact for those involved in discharging the containers at destination ports when they finally arrive, as well as the final-mile delivery carriers. When the cargo does start to turn up, the further potential risks emerge.

“The risk of theft at ports and freight depots in this scenario is heightened and a greater focus on security is required. Whether it simply be at an overspill holding or storage area, or temporary warehousing, wherever and whenever cargo is not moving, it is more likely to be stolen.

“Those active in the supply chain should be mindful of these security risks. Due diligence, undertaken to ensure that any third-party provider of storage is adequately resourced to meet these demands, is a prudent step to take in these circumstances,” he added.