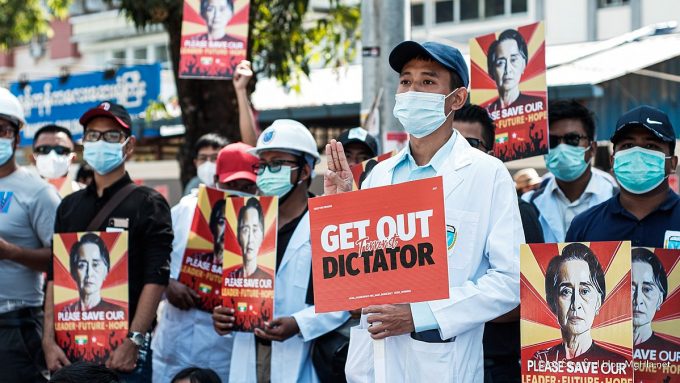 Garment manufacturers are considering whether to leave Myanmar, creating an uncertain future for domestic freight forwarders.

Human rights groups claim the military has killed over 800 protesters since seizing power four months ago, and with civil disobedience still active, there’s little prospect of a political resolution.

According to a report by the Garment Group of EuroCham Myanmar, the crisis has created safety, logistical and banking challenges for all businesses and employees.

“Declaration of martial law in some Yangon townships has particularly affected the safety of garment sector employees who live there,” explained EuroCham.

It said while some garment workers who fled the violence in March had returned, a quarter of all employees have already lost their jobs.

“European companies now need to decide whether to continue to source from Myanmar. If they don’t, our suppliers’ factories have informed us that they will close.

“Inevitably, sourcing will relocate to other countries and the sector is unlikely to recover for years.”

Rickard Ingvarsson, CEO Asia at Scan Global Logistics (SGL), said he thought were up to 600,000 garment workers at risk.

He told The Loadstar: “The garment sector is struggling to get raw materials into the country and ready-made products out, not only due to the political situation, but also because hubs like Singapore have very limited capacity available going to the US and Europe.

“Most of the factories have diverted orders to China, Laos and Cambodia, while some have shut down or are in the process of closing.

“But there’s also some light in the tunnel, as certain customers plan to place new orders this month. However, in smaller quantities and with close monitoring of the situation.”

Things have been bleak for all types of cargo in Myanmar since the coup. SGL said February, March and and April saw “close to a complete lockdown situation,” with not much cargo moving, other than some cross-border road freight for sea or air connections via Bangkok.

But, even for road freight, there is a curfew from 8pm to 4am in most places and numerous army checkpoints, therefore “domestic transport is slow, inefficient and costly, also partly due to a doubling of fuel prices,” SGL noted.

The global capacity constraints in container shipping have only served to compound Myanmar’s freight difficulties. SGL explained: “The logistics scene has taken a hit due to Covid, causing imbalances, resulting in a lack of equipment and, in particular, 20ft dry and reefer containers.

“This lack of equipment, combined with sea freight rates rising by five times or more, has caused major challenges for the export of rubber, agricultural products and frozen seafood. Farmers are now on the verge of losing their next season, due to a lack of fertiliser, seeds and other supplies coming in.”

Furthermore, SGL said, many shipping lines have struck Myanmar off their sailing plans and the few still left are “unable to get the cargo out due to civil disobedience” and the worsening equipment shortage.

“Almost 75% of the feeder services connecting Myanmar to mother-vessels have been cancelled, and most of the carriers are not accepting booking to the US and Canada,” said the firm.

As for airfreight, SGL said all the major carriers had returned with weekly flights, but space was at a premium.

Given the impact of Covid and the container shipping bottlenecks, SGL said “adding a violent coup to the equation” had caused “even more damage to the logistics sector and a tragic loss of many lives, resulting in many foreign companies leaving Myanmar or putting things on hold.”

Despite two years of damage and disruption from Covid-19, logistics professionals are “remarkably” bullish on ...