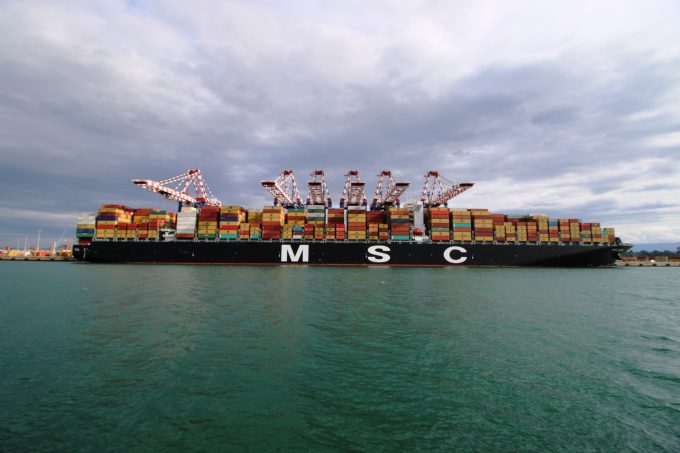 MSC confirmed today that it will resume its Asia-US west coast Maple service at the end of the month as an “exclusive” product.

It follows the 2M loop with Maersk being suspended after only three sailings.

The carrier said: “The service was first introduced in September on the transpacific trade, designed to assist shippers in the wake of the Hanjin announcement. “Maple is an exclusive MSC provision.”

Last week, Alphaliner reported that the 2M alliance had suspended the extra loader, dubbed TP1 by Maersk calling at Yantian, Shanghai, Busan and Long Beach. Now, MSC has said the service will resume with the sailing of the 4,675 teu MSC Rochelle on Friday 28 October.

Six panamax ships were stemmed for the 2M transpac loop, but in fact vessels of 7,800-9,400 teu were deployed in the three voyages.

The service was also advertised with a call at Prince Rupert, but the Canadian port was omitted from all three sailings and has been dropped by MSC.

A press release from Maersk Line on 7 September announced the new TP1 service and said: “We are responding to increased demand in the transpacific. With supply chains disrupted, many customers are approaching us for transport solutions for their cargo. The TP1 service is a stable, long-term solution to meet our customers’ needs.”

However, after just three sailings, Maersk Line rowed back on the “long-term” commitment and said: “We are reviewing the plans for TP1 and will update customers and the market in due time. In the meantime, we are deploying extra loaders according to the customers’ needs.”

This suggests a disagreement between the 2M partners over strategy and, reading between the lines of MSC’s announcement today and Maersk’s earlier comment, MSC seems intent on mopping up the remains of the Hanjin business by organic growth – a policy it has favoured in the past.

But Maersk could be also considering a bid for the bankrupt South Korean carrier’s Asia-US network, which was put up for sale by the court in Seoul last Friday – hence its current strategy for ad-hoc coverage rather than new liner services.

An added complication is HMM’s proposed membership of the 2M alliance in April next year.

After the demise of Hanjin, which had an 8.4% share of the transpacific market, including a 17.8% share between Busan and the US, the 2M + HMM alliance deal, which was attractive only for its addition of a 4.4% increase in market share for the 2M, might not look so interesting to MSC or Maersk.

Indeed, since the signing of an MoU in July, there have been no official announcements from either party.

In the interim, HMM has aggressively targeted its compatriot’s shipper base with weekly offerings of panamax and neo-panamax ships between China, Busan and Los Angeles/Long Beach.