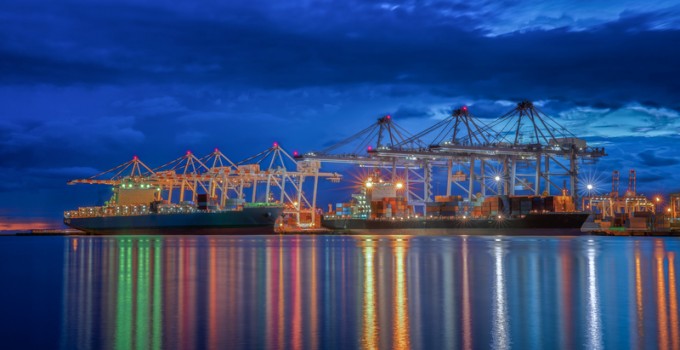 Container terminals should “get used to blanked sailings and volume volatility”, while shifting trade flows could benefit hub ports over gateways.

According to Lars Jensen, CEO of SeaIntelligence Consulting, liner industry consolidation has been “phenomenal” in allowing carriers to manage capacity through blanked sailings, with the bumper profits seen in Q2 likely to ensure the frequent withdrawal of capacity becomes a mainstay.

“Ports and terminals have to get used to a market with increased usage of blanked sailings – that is simply the new norm,” Mr Jensen said at the Container xChange Digital Container Summit.

And, assessing the long-term shipping trends from the Covid-19 crisis, Mr Jensen said ports would also need to grapple with increased volume volatility.

“The short-term inventory-impact on demand is substantial,” he explained. “The large growth in container volumes, especially on the transpacific now, is to a significant degree, very likely driven by inventory needs, which means the effect will be temporary and we are going to see a high degree of volume volatility.”

Mr Jensen said the success of consolidation among major carriers operating on the deepsea trades would likely trigger an additional wave of mergers and acquisition activity among niche and regional players.

“You still have very fragmented intra-regional markets in Asia, Europe and the Americas, so what is very likely to unfold over the next five years is another consolidation round, this time among intra-regional carriers – although it’s questionable to what degree the major global carriers will play a part.”

Nevertheless, he said, ports and terminals would face a market in which carriers were more flexible in their transhipment patterns, and could “more quickly shift volumes around.”

Volumes are also shifting as a result of the trade war and the current rush to diversify supply chains. Mr Jensen said this would provide opportunities for some shipping lines and ports, because, for example, there were many fewer US imports from China, but the overall quantity did not decline.

“The only thing that happened is that these goods were shipped from Vietnam, Indonesia, the Philippines, etc, but they still get on a transpacific vessel. It’s an opportunity for other ports in other countries, and you see an uptick in feeder services, as trade tends to be more dispersed, rather than flowing between a few individual large port pairs.”

Indeed, according to terminal operator PSA, hub-and-spoke transhipment ports have “performed better” than gateways. Head of group business development Wan Chee Foong said: “The demand and supply shocks have certainly been disruptive, but there is a silver lining – it has reinforced the importance of hub ports, which, in general, have performed better than gateway ports.

“They have been especially critical in keeping global trade and supply chains connected and moving during the pandemic.”