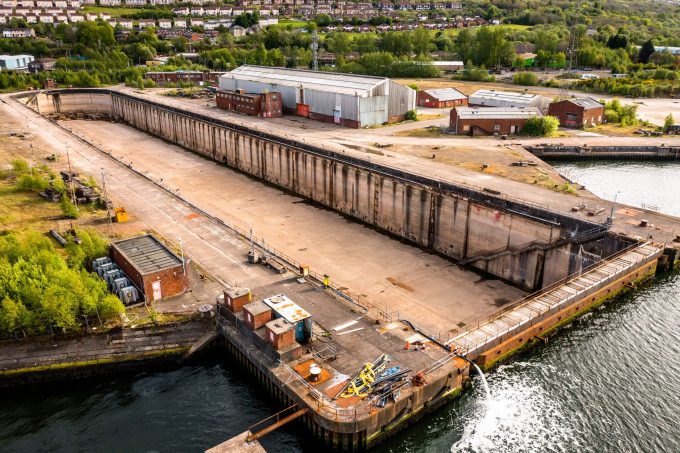 Atlas already has “two blue chip container lines signed up” and is “in talks with another two”, MD Michael Dixon told The Loadstar.

“They are less than 20 years old, some of these vessels,” he added.

The dimensions of the dock, at 300 x 45 metres, means it can accommodate panamax-size vessels, with room to spare.

“We know there is a strong labour pool in the area, and that’s what we’ll be looking to tap into,” said Mr Dixon.

“We appreciate that it’s decommissioning, rather than shipbuilding, but I’m proud to be at the forefront of this exciting opportunity to be the number-one decommissioning provider in the UK.

“On an international level, we bring responsible and ethical decommissioning to Inchgreen, which is immensely important to us. Essentially, [it’s] a reverse-engineered process, which avoids the beached demolition process we know goes on elsewhere in the world.

“It is still an inherently risky process, but we have excellent guidance to make sure everything is conducted safely.”

Mr Dixon cites the advantages of recycling steel over primary production as a potential advantage of the site, as for every kilogram of scrap steel recycled, there is a saving of 1.5kg of CO2 equivalent in emissions, as well as 13.4 megajoules of imbued energy and 1.4kg of iron ore.

Compared with primary production using mined iron ore and coking coal, this amounts to an efficiency of 73%, 64% and 90%, respectively. Some two-thirds of steel demand in the UK is served by primary production.