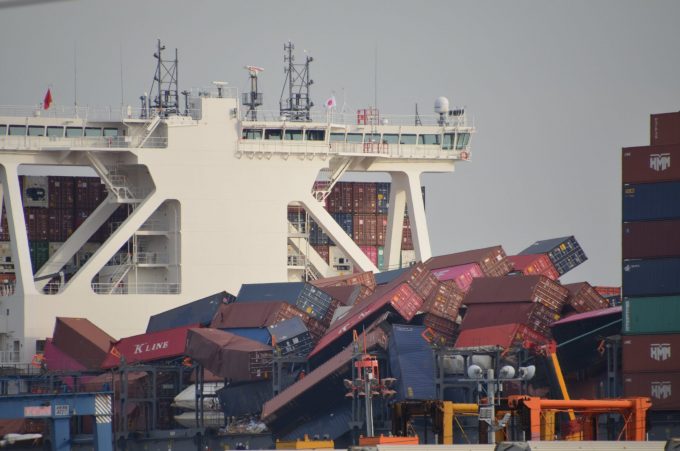 Last winter was an exceptional period for cargo losses on the North Pacific trades, with many containers lost in storms – not least from the ONE Apus, which lost more than 1,800 containers.

The 14,000 teu ship was en route to California when a storm dislodged container stacks which toppled into the sea, damaging lower-stacked containers as they fell.

In the first three cases filed with the New York Southern District Court, Navigators Inc and forwarders De Well and All-Ways are claiming more than $2m in damages against carriers, including in one case, THE Alliance partners and shipowners, and in two other cases, forwarder Kuehne + Nagel is also named as a defendant.

If the ONE Apus and Maersk Essen, which lost more than 750 containers in January this year, were the two major container accidents of last winter, this year has seen a considerable improvement in accident statistics.

The two major container losses recorded so far this winter were the 4,250 teu Zim Kingston‘s around 109 boxes lost off the coast of Vancouver in late October, precipitating a fire with a number of containers with dangerous cargo falling into the ocean,  and the less-publicised 4,500 teu Cosco Nagoya, which lost some 60 containers off the coast of South Korea – in spite of the name, the vessel was not operated by Cosco.

According to reports, the 2008-built vessel was on charter to Singapore’s Sea Lead Shipping when the containers were lost.

At least six vessels lost containers overboard last year, including the Ever Liberal, MSC Aries, Maersk Essenm Maersk Eindhoven, ONE Apus and ONE Aquila – major events limiting capacity on the Pacific just as a post-pandemic market was booming and US consumers returned to spending after lockdown.

Just over a year after entering the container liner shipping market, Singapore-based Pioneer Line is ...