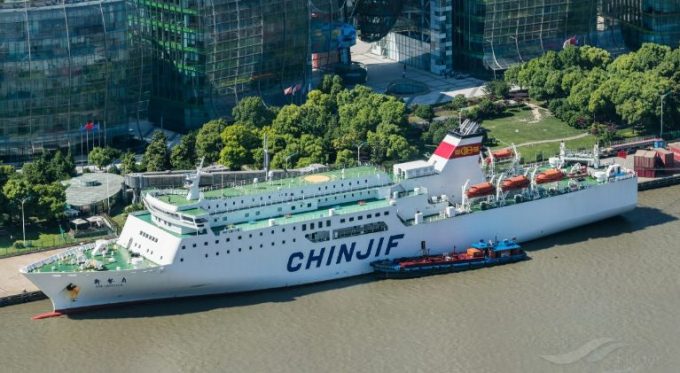 Japan-China International Ferry has ordered a ‘cruise containership’, which can also carry 192 passengers, for its Japan to China ferry route.

It will be built by China Merchants Jinling Shipyard for delivery in 2024 and can carry around 334 teu, including 60 teu of reefers, about 134 teu more than its current vessels.

Part of Cosco, Japan-China services call at Shanghai and at Japan’s ports of Osaka and Kobe, alternating between Osaka and Kobe every other week, taking five days to arrive.

As there is a separate terminal for ferries in Shanghai, they are not be subject to the berthing delays that have plagued containerships.

As a result of the Covid-19 pandemic, the operator began carrying more containers on its two ships, the Su Zhou Hao and Xin Jian Zhen, each with around 200 teu of cargo capacity. In October, Japanese logistics group Nippon Express booked the operator to get its containers past the congestion around Shanghai.

The design of the new vessel focuses on environmental protection and carbon emission reduction, and is the first ro-ro/pax ship independently developed in China to meet the requirements of the third stage of EEDI, setting a precedent for future vessels.

Consul-general of the Chinese consulate in Osaka, Xue Jian said this year marked the 50th anniversary of the resumption of Sino-Japan relations following World War Two, and it was important to keep supporting economic and trade links.