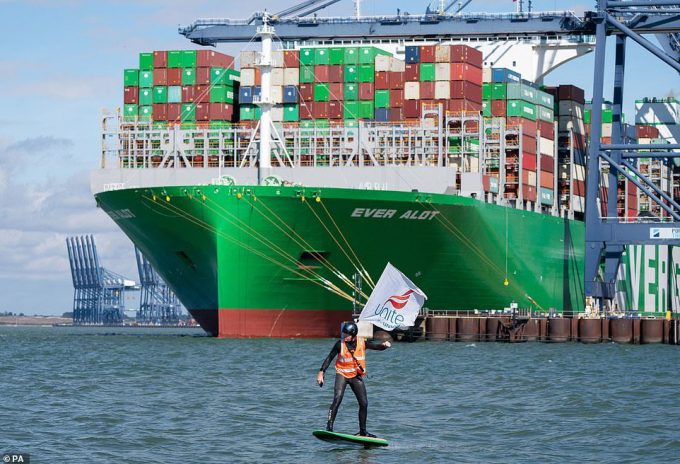 Strike action by Felixstowe dockers is well supported by the wider population because there is an understanding that wages have fallen well behind the curve, while the striking workers were incensed by the port operator Hutchison’s apparent suggestion that dockers would turn up for work.

The effect of industrial action on the UK could be far-reaching and long-lasting, according to some industry figures. And the dockers have been true to their word, withdrawing their labour in support of their pay claim.

As one forwarder told The Loadstar: “The port’s management was either conned or deluded, or conning and deluding, because they were telling everyone that maybe workers would turn up. Midnight Sunday, bang – there was the picket line.

“No dockers turned up to work because there has always been the support for the strikes. This isn’t because they want a few days off or because they can afford it; they need it.”

Hutchison Ports was contacted by The Loadstar, but had not responded by the time of publication.

Docker-support has perhaps been shored up by the knowledge that immediately before the strike began a deal had almost been reached, according to The Loadstar sources.

They suggest that the appearance of the owner at the port over the last week could suggest port operator Hutchison is “digging its heels in”, or that a settlement could be negotiated.

Whatever the reason for the visit, the possible effects of a prolonged strike may well be blamed on Hutchison, rather than the dockers themselves. A PR disaster for the company.

One forwarder told The Loadstar the impact of further strikes at Felixstowe could see container lines move to other ports on mainland Europe..

Since the eight-day walk-out at the UK’s largest box port began on Sunday, carriers have responded in varying ways: some sped up; some slowed down; some omitted the country altogether (including Cosco and Maersk), discharging UK-destined freight elsewhere.

Amid all this, shippers and forwarders have hastily been trying to reroute and circumnavigate the confusion thrown up not only by the strikes, but the port’s response and planning.

“W’re hearing that this may well rumble on into December,” said one source, referring to Unite’s general secretary, Sharon Graham, warning that without resolution the union and its members would be willing to continue industrial action.

The union’s demands are simple – and seemingly supported – a pay rise in line with inflation. Hutchison which runs Felixstowe offered 7% and a one-time £500 bonus that the employer described as “very fair”.

Others in the sector disagree, with sources telling The Loadstar it was “nonsense” to suggest 7% was fair, as they pointed to surging inflation, 12.3% according to the RPI on 17 August, a level not seen since January 1982 – an escalating cost-of-living crisis, with energy bills for a standard three-bed home expected to surpass £4,000 this winter.

The impact of the dispute on the UK economy and its future supply chains is likely to become more pronounced after the strike ends – particularly with Liverpool set to see similar action next month, and if the threats of further strikes appear sincere.

Some, including Logistics UK’s Nathalie Chapman, have said while it was “far from ideal,” consumers were unlikely to notice the strikes because Dover is the primary route for goods.

A forwarder said: “This ignores the real issue, which is that if shipping lines think UK gateways are unable to get this thing under control – which is to say, if they do not meet the reasonable demands of their workers – they may consider the country not worth the hassle.

Sources said news yesterday that Felixstowe had told dockers not to come in to work on bank holiday Monday, despite the strike set to end this Sunday, appeared to indicate a “very bad relationship” between the two sides – as workers would have been on overtime rates.

“That’s not conducive to finding a resolution, and is likely to galvanise support for further acts, which’ll see carriers off to Europe, if it continues to Christmas,” said a source.

Should that happen, the forwarder added, the UK would be left as a “feeder destination”.

A striking docker at Felixstowe laps the deserted port with their @unitetheunion flag flying high.

Workers’ power at its best – nothing moves without us.

Brilliant work from the striker who captured this moment and from all those taking a stand for a proper pay rise 👏 pic.twitter.com/s4UFOMA3Qp