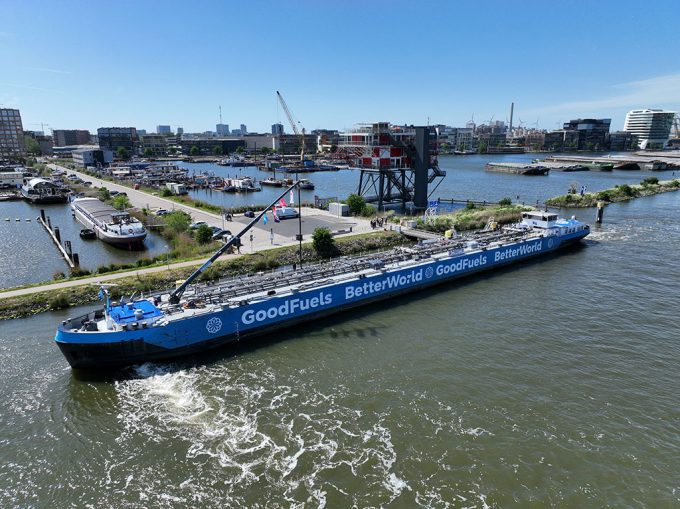 In a positive step for biofuels, a distinct contender for carbon-neutral ship fuels along with green methanol and green ammonia, Goodfuels has signed an agreement with ITOCHU, the Japanese trading giant, to source and scale marine biofuel throughout the Asia-Pacific region.

The partners will initially target Singapore, the world bunkering capital, before moving on to establishing capacity in Japan and across the Asia-Pacific region.

GoodFuels specialises in marine biofuel drop-in replacements, which can be substituted for heavy fuel oil (HFO) and other ship fuels without any technical changes needing to be made. Generated from waste streams of fats such as used cooking oil, they emit CO2 at the funnel, but deliver an 80-90% reduction of CO2 emissions on a well-to-wake basis.

“…we knew that we had to find partners whose competencies and values match with our own mission to bring about a better world,” said Dirk Kronemeijer, CEO, GoodNRG Group. “…ITOCHU’s expertise in the marine fuel market and experience with other low carbon marine fuel solutions will be invaluable as we look to enable two of the world’s most important maritime nations to deploy our advanced biofuels and reduce carbon emissions from shipping.”

But great care must be taken to ensure that all fuels provided are, in fact, derived from residual waste streams, as Malaysia and Indonesia are the world capitals of virgin palm oil production.

Palm oil has been linked to campaigns of indiscriminate deforestation and habitat destruction, which environmental groups calculate give it a higher carbon footprint than petrol.

Goodfuels COO Bart Hellings previously told The Loadstar that his company was committed to using only residual feedstock types. “At the moment we exist in a fully palm-free direction, so we don’t use any palm oil nor palm oil derived residues, because we do not believe that industry is reliable enough to source from,” he said. “So, if you had a waste stream of palm oil, we would also not use it in our biofuels.

“I’m not saying sustainable palm oil does not exist… [and] I would stress that palm oil is still the most efficient way to make a vegetable oil. But then again you could question whether that should be used for a fuel application.”

But not everyone is making such commitments. Another biofuel provider setting up in Singapore refused to commit to preventing virgin palm oil from entering its feedstock supplies, telling The Loadstar only that it had managed to avoid it so far in Europe.

For more on decarbonisation, listen to this clip on The Loadstar Podcast: big interview with Hapag-Lloyd