News / Global pressures depress trade in most sectors, but air cargo keeps its end up

October proved a stronger month for air freight than September, no matter whose figures you believe.

WorldACD reported that, after a decline in year-on-year volumes in September, October saw them creep up 2%, globally.

WorldACD broke the figures down, showing that Asia Pacific performed best, with exports up 4.2% and imports up 2.7%; in Europe, however, where industry insiders had indicated some weakness in the market, exports grew 0.5% and imports were up 2.7%.

Asia Pacific benefited from the largest year-on-year increase in yields, up 10.4% in US dollars, led by the market to North America, where yields grew 14.3%. Hong Kong to the US, meanwhile, saw year-on-year yield growth of 19.5%, beating last November’s yield by $0.35.

In euros, the worldwide yield was up 10%, year on year.

DHL said: “The outlook for global air trade remains solid …This development is driven by declines in the air trade outlooks for in Germany (-4 points), India (-7 points), UK (-7 points), Japan (-11 points) and South Korea (-11 points). With a slightly improved outlook, +1 point, China and the US can do little to compensate for this loss.”

But Tim Scharwath, CEO of DHL Global Forwarding, added: “Given the smouldering trade conflicts, especially between the US and China, and economists’ expectations that the global economy could cool down, it is not entirely surprising that trade momentum has weakened slightly.” 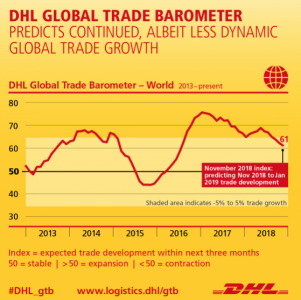 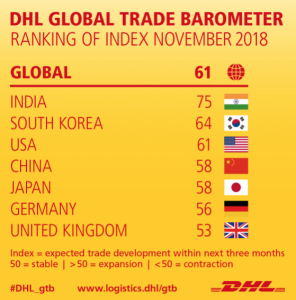