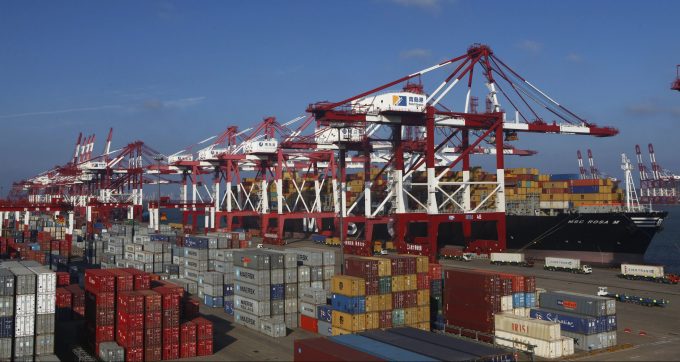 Today, AIS data from VesselsValue shows around 50 containerships at anchor near Ningbo-Zhoushan Port, where operations at Ningbo Meishan Port Terminal remain halted for the sixth consecutive day, after a member of staff tested positive for Covid-19.

Pressure on supply chains is building as a result of a series of incidents, the most recent at Ningbo-Zhoushan, and the latest data suggests nominal capacity is approaching levels seen in the early days of the pandemic when carriers blanked sailings in the first half of last year.

According to data company project44, Ningbo Meishan terminal began turning vessels away last Wednesday, following the positive test on the worker, who had tested negative three days earlier and who was staying at the terminal’s on-site dormitory.

Meanwhile, port congestion in Asia, Europe and the US has severely affected carrier services, cutting available capacity as ships sit at anchorage awaiting berths to load and unload cargo.

Ningbo Meishan Terminal handles around 25% of the container cargo at Ningbo-Zhoushan, which is being redirected to other terminals.

On Thursday, project44 said there were 28 ships at anchor, awaiting a berth, east of Ningbo – that figure has nearly doubled in the four days since.

And, according to project44, the average number of weekly port calls at Ningbo has plummeted by 70%, “from nearly 200 container vessels to less than 60 this week”, it said, adding: “Ocean carriers are diverting and initiating blank sailings to and from the port. project44 has recorded 37 blank sailings as of 13 August.”

A similar Covid event at Yantian in June and the impact of  Typhoon In-Fa in July have hampered manufacturers’ exports from China, said project44 VP sales Josh Brazil.

“Now, with upstream supplier shortages, the manufacturing hubs are having difficulty getting goods out of the country,” explained Mr Brazil, adding that carriers were “keeping their vessels at full capacity”.

Nominal capacity from Shenzhen heading for North Europe in June, the last date for reliable data, had declined to 100,000 teu, according to project44 data. Similar data for vessels calling at Long Beach showed capacity was down to around 120,000 teu on the Pacific, although the Los Angeles figures for June were better, at 240,000 teu.

Delays have seen the number of vessels awaiting a berth at Long Beach or Los Angeles increase in recent days, the latest AIS data from VesselsValue showing 31 ships at anchor in San Pedro Bay.

The number of containers moved per vessel call has increased exponentially during the pandemic, placing ...

Ocean carriers are confident they can keep freight rates at elevated levels at least for ...