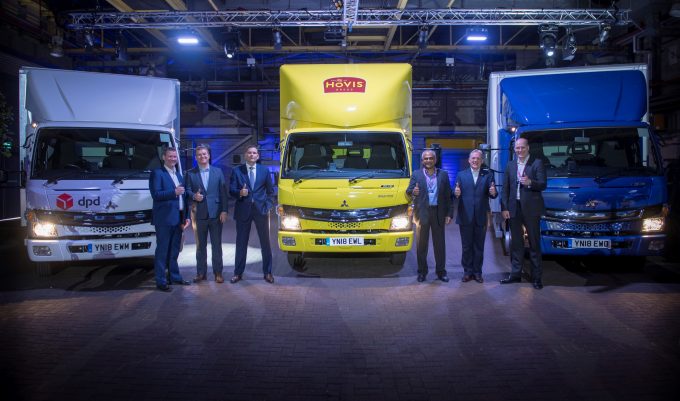 Fuso’s eCanter will hit roads across the country, joining customers in Germany, Japan and the US.

Speaking at the launch in London Print Works, Fuso CEO Marc Llistosella said the eCanter was the “ideal solution” for London as the capital’s mayor plans major GHG emission reductions.

“It is the customers that have asked for electric vehicles, as perceptions change in environmental matters, not just here but globally,” said Mr Llistosella.

“Trucks are the indispensable backbone of society, and the industry is seeing three new ABCs emerge: urbanisation, clean energy and technological development.”

MD of Mercedes Benz and Fuso Trucks UK Mike Belk said the recent bad weather across the UK underlined how reliant the economy was on trucks. Over the next two years, he said, Fuso would invest €2.5bn in research and development, with expectations that by 2020 around 25% of commercial vehicles would be electric.

“Cities cannot function without vehicles, and soon more than half the global population will live in these urbanised areas. But in the UK, many cities are in breach of air quality standards,” said Mr Belk. “Together with London’s mayor, we share an ambition to participate in the active reduction of harmful pollutants and will develop and build trucks relevant to this aim.”

Last year, the company sold 154,000 vehicles and Mr Llistosella is confident of the eCanter’s potential, noting that replacing 1,000 conventional trucks with them would cut some 16,000 tonnes of CO2 emissions.

He also said switching to the full eCanter’s system – including its renewable energy source – could see operators increase their overall energy efficiency by around 60%.

One problem electric vehicle producers are coming up against is the reliance on cobalt for the batteries, with most of the world’s supply coming from the Democratic Republic of Congo (DRC).

DRC has faced strong criticism for human rights abuses linked to mining practices, but as it produces 12 times as much as the other nine top 10 producers combined, it is hard to avoid.

“Our batteries require cobalt to function, and obviously the bulk of this is coming from the DRC,” said Mr Belk. “We won’t deny there are clear supply chain issues facing us in this respect, and we are committed to improving this situation.”

However, Mr Belk did not expand on what the company would do to either push the DRC into improving its practices or how it would source cobalt from elsewhere.

“That said, battery reliability on cobalt is being reduced, and with more minds being brought into research and development this will reduce further,” said Mr Liebrich. “New batteries with a diminishing reliance on cobalt are being built with nickel and lithium, of which there is a lot worldwide.”

For US surface transport providers, the uphill slog that characterised the past year seems set to ...

Amazon driving toward an all-electric future

Revenue down, but profits up for upbeat XPO Logistics in first half

XPO Logistics gained more from less over the six months to June, with profits up ...

A near-9% drop in revenue failed to slow CH Robinson’s growth momentum, as income from ...

Davies Turner still has a taste for Turkey, despite local trade volatility

Malaysia-based Ezyhaul has raised US$16m in a Series B fundraising round, one of the largest ...

Take a ride along the Punjabi American highway

Absorbing long read from the Los Angeles Times on the growing influence of Sikh immigrant ...