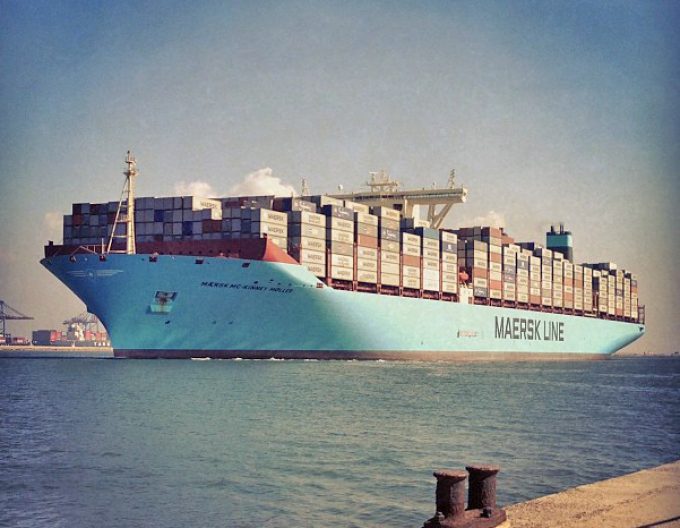 A freight forwarder who has been waiting for Maersk to deliver freight which is more than a month late, has excoriated the Danish line, not just for its service, but also for its poor communication.

It brings into sharp focus the unprecedentedly poor service performance of the lines at a time when the cost of freight is at historic highs.

Jon Woods, director at UK forwarder XXXL in Felixstowe, booked a 20ft and a 40ft container of clothing and footwear with Maersk from Singapore to Southampton. The freight left Singapore on 20 February, with an ETA of 7 April at the south coast port.

The freight was to arrive in the UK to meet demand over Easter and the May Day bank holiday. Now, said Mr Woods, “I don’t think it will even make it into the shops to meet the Jubilee bank holiday in June.”

Both containers were on 2M Alliance vessel MSC Alexandra, but the 20ft container was offloaded in Rotterdam on 19 April and is said to be on a feeder vessel heading for Southampton to arrive on 5 May.

Meanwhile, the 40ft box, at Wilhelmshaven, will leave on 5 May for Bremerhaven, from where it will be transhipped to Rotterdam on 12 May, then be loaded on another feeder for Southampton on 16 May.

“It will take longer for my cargo to get from Wilhelmshaven and Rotterdam to the UK than it took from Singapore to Europe,” complained an angry Mr Woods.

A forwarding veteran with over 30 years in the business and a fellow of the Chartered Institute of Logistics and Transport, Mr Woods said he had “never seen this level of incompetence”.

The forwarder wrote to Maersk on 27 April to complain about the delays.

He told them: “I am claiming that Maersk has caused me to incur costs because of the service failures and the inability of your system to keep customers updated. The 20ft cleared customs because it had been manifested and that meant we confirmed the transport plan.”

He added: “Given these containers left Singapore and [Tanjung] Pelepas together with an ETA of 9 April, to find that they are both more than one month late now, waiting on feeders to Southampton is not acceptable to my client, and they request that an alternative UK port is used without incurring any fees, as this is a Maersk-created service issue.”

In a response dated 28 April, the Maersk agent replied in what Mr Woods said was “gobbledegook”.

“I really do understand this is not the outcome you wanted and can only apologise on the situation.  Please note this situation was not within Maersk’s remit, due to vessel operational changes beyond our control.”

In a further twist, Mr Woods has been advised by Maersk that it will not release the 20ft container in Southampton until the ‘locals’ – terminal handling and other charges, excluding the pre-paid ocean freight – are paid in full on the 40ft box due to leave Wilhelmshaven today.

He added that Maersk, a contender for shipping line of the year at the upcoming Multimodal show, could win the prize because “Maersk offers a less shit service than its competitors”.

It was a theme taken up by Global Shippers’ Forum director James Hookham, who believes the poor service experienced by Mr Woods is symptomatic of the container industry.

He told The Loadstar that to say the failure was “due to ‘circumstances beyond our control’ was to blame MSC, but of course it is within their control – that’s what alliances were for”.

According to Mr Hookham, this is far from a one-off event by shipping lines. There are poor service levels across the board, he says, and Mr Woods’s story gives an insight into the reality behind the inadequate service figures the GSF has published quarterly with consultant MDS.

Such poor performance on the carriers’ part leads to lost sales for their customers, who probably have penalty clauses in their contracts, which the forwarder must pay, and is also liable for the extra costs incurred as a result of the delays.

Mr Woods highlighted this when he explained that he was told in late April that his 20ft box would arrive in Southampton the next day. It never arrived, and the failure was communicated to Mr Woods by the haulier to whom he paid £500 ($625) for the failed pick-up and a further £25 ($31.25) for customs clearance that never took place.

Asked if he could claim the extra costs from the carrier, Mr Woods said: “Maersk will not take responsibility for anything.”

Moreover, as well as the extra costs incurred, forwarders will likely also have to wait 90 days for payment after the goods are delivered, stretching the cash flow of these small businesses to the limit.

He believes alliances have “clear benefits to the lines, but it’s not clear what the benefits are to their customers”.

Maersk announced another record profit in its first quarter on 4 May. CEO Soren Skou said that Maersk was: “Building a very different Maersk…we are building a better business.”

In a period of historically high rates, Maersk and other major container carriers have acknowledged that service levels have been poor, with the pandemic causing major disruption and then the war in Ukraine adding to cargo congestion at western European ports as sanctions caused Russia-bound cargo to be detained.

It was also the case that Felixstowe was congested and Maersk had omitted the port in an attempt to maintain some schedule integrity.

As a result, a Maersk spokesperson acknowledged that the carrier’s services were suffering in what continues to be a difficult market.

“We are doing our utmost to cater for all our customers’ needs in the current challenging situation, where operational bottlenecks in Europe as well as North America remain a big concern due to the various disruptions impacting the global supply chain, such as Covid 19 lockdowns and the invasion of Ukraine.

“As a company policy, we do not respond to individual customers via the media,” she added.