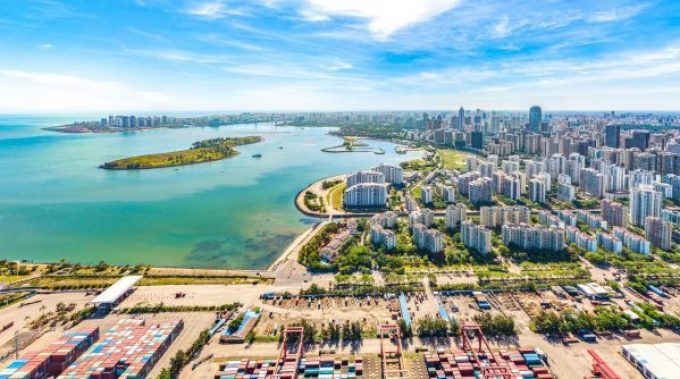 Discussions on developing the maritime economy in a post-pandemic world cannot take place in a shipping bubble. Maritime economies are part of the global trade network and must be seen as a significant and critical element of global trade.

Today’s discussion at an International Chamber of Shipping (ICS) webinar on dealing with protectionism in maritime economies appears to have isolated the maritime sector, presenting it as a standalone industry.

The debate was centred on the ICS’s study on Protectionism in Maritime Economies, which was published last year, with the aim of, in the ICS’s own words, providing an “assessment of those protectionist/restrictive trade policies and measures that are currently being implemented by governments worldwide, which may be preventing national economies from reaping the full benefits of having access to efficient maritime transport services”.

According to the ICS, the report “is intended to encourage the formulation of appropriate policy responses”.

However, in failing to set the context in which protectionism has materialised, the report also fails to understand the critical nature of the remedies required to meet the challenges of this global issue

A pandemic is clearly a major global event, and it has had a rapid and disruptive effect on global trade. By way of contrast, the climate crisis has been, and remains, a slow burn, if you’ll excuse the pun.

While global warming is critical, the failure to adequately address this issue has rendered the ICS report meaningless in a post-pandemic trade setting. And the subsequent debate, as a consequence, missed the point.

By focusing on maritime trade and assuming that the removal of tariff and non-tariff trade barriers will be beneficial to all economies, the report fails to address the burning question of our time, that of decarbonisation, not just in the maritime sector but across the board.

In its study, the ICS has developed the Protectionism in Maritime Economies (PRIME) index using the World Trade Organization’s Intelligence Portal, among other sources. By calculating a county’s PRIME score, the ICS can determine the level of protectionism of each country, which it says is limiting its trade potential. 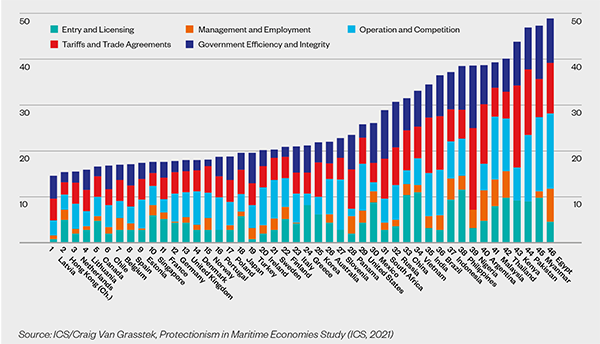 Using these scores, the study then explores two key areas – the cost of protectionism and the benefits of liberalisation – exploring alternative scenarios for potential reform.

However, in doing so, the report assumes that more trade is desirable and that the maritime sector should be the deliverer of this increased trade. Neither of these assumptions are a given.

Much of the $14 trillion of cargo carried around the globe is transported by sea more than once, sometimes several times, with the efficiencies of carrying large amounts of cargo diluted by the double counting.

Moreover, the basis for the assumption that shipping will be the best way to develop trade is that it is currently the most efficient mode of transport, as reiterated by Phillipos Philis, president of the European Community Shipowners Association (ECSA) in today’s webinar debate.

In addition, the burning of fossil fuels to develop, manufacture and deliver goods has been shown to be inefficient; what the report does not address is how these inefficiencies will be reconciled with the most critical question of our time: how to maintain life on a planet threatened by devastating man-made climate change.

Glib statements, such as “shipping is the most efficient means of transporting goods”, reveal that shipowners have yet to understand the full impact and challenges that lie ahead for everyone, with an appropriate response to tackle those issues in the near future.

Industrialists the world over must understand that the answer to climate change is not more trade, but better trade, strengthening local community action and rapid and comprehensive decarbonisation.

Better trade necessarily requires more equal trade and a sharing of resources largely monopolised by developed countries. The pandemic has highlighted this in high resolution with the failure by richer nations to share vaccines, while the companies that used public resources to develop those medicines have made profits that match the GDP of some smaller economies.

Finally, the report and the speakers failed to acknowledge that the major cause of climate change has been industrialisation. Major economies have over-produced and the mantra at least for the past 200 years, and certainly for the past 50, has been to increase GDP, supposedly raising the wealth of all by producing more.

Clearly this is not a sustainable solution. Slapping someone around the face hurts, slapping them more and harder, isn’t going to help them. Clearly the solution is to stop the slapping.

If the cause of global warming is over-production, then more production won’t solve the problem. This report and the whole debate at today’s webinar, has been just a slap in the face for those communities most at risk from the climate catastrophe.

A coalition of transport associations has warned world leaders that supply chains face “collapse” if ...