News / Decision not to install scrubbers could prove expensive for ONE 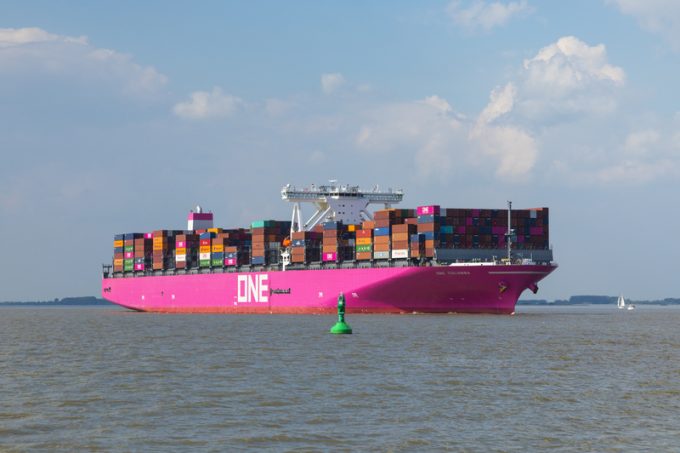 Ocean Network Express (ONE) could “pay the price” for not investing in scrubber technology.

According to Alphaliner, the carrier will be more exposed than its rivals to the higher cost of low-sulphur fuel.

The consultant said the Japanese carrier was the only one of the top 10-ranked carriers that will have no ships equipped with exhaust gas cleaning systems (EGCS) that allow a vessel to continue to consume cheaper HFO [heavy fuel oil] after the IMO’s 0.5% sulphur cap becomes law on 1 January.

MSC ‘leads the pack’ on scrubber installation, according to Alphaliner data, with confirmed orders for equipping 250 units, nearly half the carrier’s 564-vessel fleet.

Evergreen has the second-highest scrubber programme, with 150 ships, although in percentage terms, at a massive 74% of its operating fleet, the Taiwanese carrier has a higher commitment than MSC.

Third in the scrubber ranking is Maersk. The carrier was originally strongly against the solution, but will now have around 140 ships of its 700-vessel fleet equipped with the technology.

Also reluctant to go down the scrubber route, Hapag-Lloyd belatedly confirmed it was installing scrubbers on 10 of its 13,000 teu Hamburg-class vessels during this year and next.

Maersk and Hapag-Lloyd were initially banking on the industry complying with IMO 2020 by bunkering with low-sulphur fuel oil (LSFO), but as time has gone on and their competitors, including alliance partners, have opted for scrubber programmes, they have been obliged to seek out last-minute scrubber retrofits in a market that Hapag-Lloyd admitted was “already sold out”.

However, ONE, which suffered a $600m loss in the first year as the merged container businesses of K Line, MOL and NYK, decided on a single strategy of LSFO for its fleet. Indeed, the only reference to scrubbers appears in the carrier’s Q2 results commentary, “action plans”, in which ONE refers to the installation of scrubbers as “under study” for some of its larger ships.

ONE posted a first-half net profit of $126m, but it is predicting a loss of $66m in the second half of its fiscal year, which it attributes to a “deterioration in spot rates” and concerns over a further slowdown in the global economy.

Significantly, ONE’s accounts assume that the whole additional cost of compliance of IMO 2020 will be met by its customers via its OBS (one bunker surcharge) mechanism.

However, Alphaliner suggests ONE will enter 2020 at a cost disadvantage to its liner peers, “exposed to the higher cost of low-sulphur fuel, due to its reluctance to move ahead with scrubber orders”.

Meanwhile, carriers have begun to roll out additional low-sulphur surcharges, effective 1 December, to cover the expected $200 per ton price difference between LSFO and HFO.

Interestingly, this will apply to services whether or not ships deployed on the services have scrubbers fitted.