Maersk Line plunged $151m into the red in the second quarter dragging down its half-year results to a net loss of $114m, compared to a profit of $1.2bn in the first six months of 2015.

The newly appointed Maersk Group chief executive Soren Skou, this morning giving his first results presentation since the abrupt dismissal of Nils Andersen in June, defended the carrier’s above-market growth of 6.9% versus the estimated container demand growth of around 2% in the quarter. 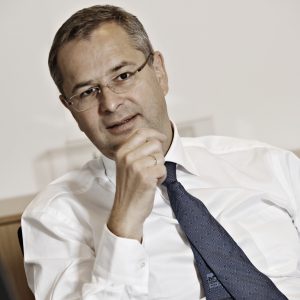 Mr Skou said that Maersk Line had experienced strong volume growth in a number of intra-regional trades as well as on backhaul legs, and speculated that there might also have been some positive effect from the South Korean carriers Hyundai Merchant Marine and Hanjin Shipping being in restructure mode.

“Some customers might have wanted to move their business away from them, and that has benefited us of course,” he said.

Mr Skou said he could not predict when the container market would improve but commented that the spot rate increases on Asia-Europe and the transpacific had been “encouraging” as was the “wave of industry consolidation”, which he thought would improve stability in the industry.

Mr Skou added that one of the chief problems this year was that contract rates, particularly on Asia-Europe and the transpacific tradelanes, had been “reset at much lower levels at their renewal”.

“We do not see much change in this, but at the end of the day it is down to our customers as to whether they want to commit,” he said.

In response, Mr Skou said that Maersk Line would continue its relentless drive to cut costs, which could be bad news for sister company APM Terminals as it saw many “procurement opportunities” related to reducing terminal pricing around the world.

Indeed, rate pressures and network changes, along with the impact from terminals situated in cash-strapped oil exporting countries, were the reasons for 30% second quarter net profit dip at APM Terminals to $112m.

However, APM Terminals did see top line revenues grow 3% year-on-year to $1.06bn, compared to the second quarter of 2015, with a throughput growth of 9.4m teu at its terminals – up by 2.6% quarter-on-quarter and mainly attributed to the Grup TCB acquisition.

Meanwhile, its logistics arm Damco was the only subsidiary to post an improved second quarter result, recording a $10m profit in comparison to $7m last year, driven by “cost saving initiatives, improved processes and operational efficiencies”.

And neither did Maersk change its 2016 guidance from the first quarter, which was for an underlying result “significantly below” the $3.1bn earnt last year.

Mr Skou also announced that the annual Capital Markets Day scheduled for 22 September had been postponed until after the result of the board’s strategic structural review of the business which he said would come at the end of the third quarter.