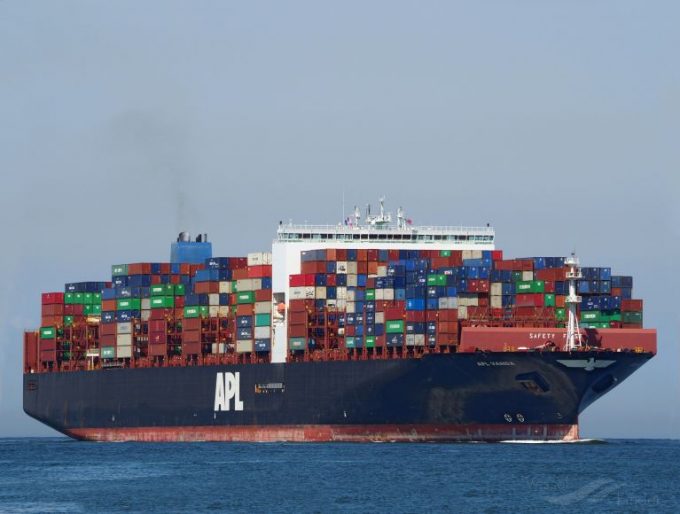 CMA CGM has at last cleared up the mystery of the APL Vanda, finally acknowledging that the vessel suffered a stack collapse that saw 55 containers lost overboard.

AIS data shows the 17,300 teu ship is now docked at the China Merchants-operated Doraleh Terminal at 05:30 local time, after arriving under its own steam this morning local time.

A CMA CGM statement delivered today, said: “On 3 July, APL Vanda reported that about 55 containers from a single bay fell overboard whilst the vessel was facing heavy weather en route from Singapore to Suez, just before entry to the Gulf of Aden. No injury has been reported and all crew members are safe.

“The vessel has stopped in Djibouti to clear some damaged containers on deck before safely continuing her voyage. We are working with all relevant authorities who have been informed of the situation.”

According to a maritime expert, monsoon winds blowing from the southwest give rise to heavy swells in the area and are common at this time of year.

“As the monsoon proceeds in a north-easterly direction from the equator to the Indian Sub-Continent, APL Vanda would have had these swells on her port bow to port beam leading to synchronous rolling and container loss. This does not appear to be a parametric rolling issue,” concluded the expert.

He went on to say that the vessel could not have returned to Singapore for the same reason, as the swell would then have been on the vessel’s starboard quarter. The vessel attempted to head back towards Singapore on 6 July, but returned to its anchorage off Djibouti on the same day.

“AIS track shows she approached the pier for starboard side alongside berthing, then aborted berthing, went away to turn around and then return for portside berthing at Djibouti Container Terminal,” the maritime expert explained.

He went on to say that these movements are consistent with the south-westerly monsoon swells. “Winds from port bow/beam would lead to cargo loss and collapsed stows on the starboard side, making it difficult to dock on the starboard side if there are overhanging containers.”

The maritime expert believes this is the first instance of container loss in the Arabian Sea, and also the first container lost due to monsoon winds.

“The monsoon weather at the time of loss can be described as moderate to rough seas, widespread rain or thundershowers, accompanied by moderate visibility becoming poor in rain.

“Similar weather was predicted on Indian coasts around 30 May.”