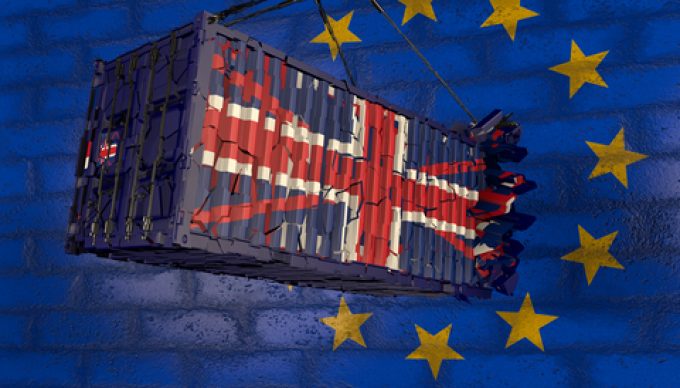 Brexit has caused UK-EU trade flows to fall by 16%, while EU-UK trade has dropped 20%, according to a report today by the Economic and Social Research Institute (ESRI).

Based on data by HMRC and Eurostat, ESRI said the impacts it had quantified were solely as a result of Brexit, and pointed to “a significant decline in trade with the UK” by EU members.

ESRI said the impacts were measured in isolation from the global effects of Covid-19, and the resulting congestion and other phenomena.

A table illustrating UK trade shows imports from EU members dropping precipitously from a peak of about 57% in 2018, to just over 40% at the start of this year. 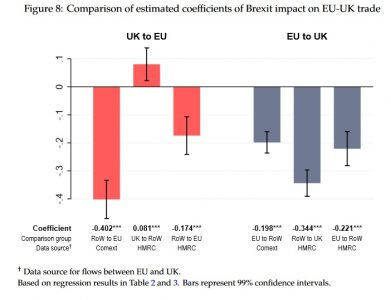 However, the report notes that exports from the UK to the rest of the world had increased.

The report notes: “Across EU member states, we find Brexit has led to a significant decline in trade with the UK in almost all cases, although by varying magnitudes. Looking at the different margins of trade, we find a substantial reduction in the number of products traded from the UK to the EU.”

It adds: “[It] leaves open for future research the question of whether the patterns of relatively slow UK export growth to the rest of the world and more rapid import growth can be attributed [to] a Brexit effect, perhaps via changing supply chains. Over time, firm-level data may help to shed light on this issue.”

One UK freight forwarder commented: “Although there are many external influences other than the UK withdrawing from the Bloc, you do think would we be in a better position now if we had stayed a member.

“Transport is the barometer of how well trade is doing, as we have seen throughout the Pandemic. However Europe remained flat at best and continued to decrease in trailer and overland modal movements. That remains today. We have not seen a peak, spike or upturn throughout 2022.

“The currency situation, political situation, unwillingness for hauliers to come to UK, unwillingness of European companies to trade with the red tape and bureaucracy of commercially engaging with the UK has all had an effect of both import and exports and seen the closure of some global manufacturing sites in the UK as a consequence. The latest one being the electric mini – a great British icon – closing down in Oxford as it is deemed more cost effective to manufacture in China and ship the vehicles back to Europe.”

He added that “we need to lobby government in making the UK more competitive and attractive to our European friends and encourage trade with the EU.

“However, as of this afternoon, what government? It really is looking rather stark and we are in it for the long haul – unlike our trucks which may be parked up with nothing to do.”

Nicolette van der Jagt, director general of Clecat, told The Loadstar: “[It] is a matter of how value chains are designed. Prior to Brexit, the EU-UK supply chains were highly interconnected; they still are, but perhaps to a lesser extent.

“A reason that could explain the bigger decrease in EU-to-UK flows is perhaps because it was easier for EU companies to diversify their supply chains, hence giving up on operations to the UK.”

She said many SMEs “have paused trading with the UK due to a lack of experience and capacity”, accounting for the decrease in trade. However, Ms van der Jagt added that UK-EU trade might recover in due course, “as companies become more experienced and SMEs build capacity around external EU trade”.

In October 2021, Richard Hughes, chairman of the UK’s Office for Budget Responsibility, said leaving the EU would reduce GDP by about 4% in the long term, leading to a larger long-term impact than the pandemic.

Ms van der Jagt said: “We need to see how the trade and cooperation agreement is being implemented and the future extent of regulatory divergence between the EU and the UK, which leads to increased complexities and costs for businesses.

“The more aligned markets are, the less friction for trade.”