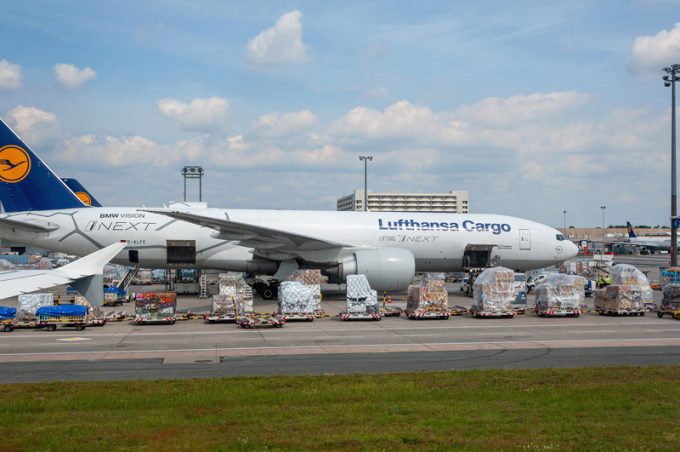 The ‘preighter’ peak is now passed and June will see considerably fewer cargo-only passenger aircraft, as airlines tentatively hope for travellers to return, according to Peter Gerber, chief executive of Lufthansa Cargo.

The carrier operated 46 ‘preighter’ flights this week, but expects that number to drop.

“We are at the peak of our preighter operations, and there will be remarkably fewer in June,” he explained. “Some PPE is beginning to go by ocean and rail, so there is less demand.”

The airline’s full freighter fleet is flying, including its six remaining MD-11Fs, whose heads have been on the block for some time.

“We are sticking to the plan to retire the last of them at the end of the year, maybe next year, but we are trying to get rid of them.”

Two new 777 freighters will arrive to take their place, one at the end of July, and the second in October.

Clearly, things are going OK in cargo: “Quite good,” in fact, said Mr Gerber. “There is a lack of capacity and the market is very narrow. It’s not bad at the moment.

“However, we lack capacity, as there are a lot of stations we can’t fly to, and there is a pressure on costs. Our business is designed for 100% operations – and we now have just 55% to 60% of normal volumes.

“Prices are higher though,” he acknowledged. “But our operation is much more costly. Preighters have only 25% to 30% of capacity, but the costs are still there. And where we can’t fly directly, we’ve had to do workarounds. Our organisation is too big for this amount of capacity.

“On the one hand, we’ve got lots of planes that can’t fly, but on the other, rates are pretty good.”

Most airlines appear to be adding passenger capacity in June, bit by bit, but Mr Gerber doesn’t think it’ll have much of an impact.

“We’ll see some capacity come in next month. But it’ll still be quite good in cargo, as so much capacity is still missing. It should be OK for us, but it’s very, very difficult to predict.”

Among the questions for airlines will be whether a ‘second wave’ of infection appears, as Covid-19 restrictions are eased, and whether there will even be demand for passenger travel.

And this demand – or lack thereof – has highlighted the dichotomy at the heart of combination carriers: the ever-present, but now clearly visible, division between cargo and passengers.

In 2019, Lufthansa Group saw 7% of its revenues come from its logistics operations, which include Lufthansa Cargo, time:matters, Jettainer and AeroLogic. Ignoring non-airline revenue, logistics accounts for nearly 11% of the group’s turnover.

Lufthansa has yet to report its first-quarter 2020 numbers, but Mr Gerber acknowledged that logistics would account for much more than 7%.

But Cargo’s capacity, and cost structure, is based around passengers returning. And the decisions will be made by the passenger side – who have little experience in volatility.

“The return of passenger aircraft is a question for our passenger colleagues to answer,” said Mr Gerber. “There are two different scenarios, one optimistic, that the market will be back in two years, and one pessimistic, that it’ll take four years.

“The biggest problem for everyone is that no one is able to predict what will happen. We are quite used to that in cargo, but it’s a problem for the passenger guys. There is no historic precedent, so it’s very difficult to judge the whole development. Everything between 20 and 45 months is possible. But I am optimistic.”

Mr Gerber said that without the bellies, “we’ll try to fly our basic core network with freighters. We’ll fly to the important cargo airports and try to keep our network as stable as possible.”

He feels vindicated by the decision made in 2009 by a handful of combination carriers, including Lufthansa, to stick with freighters at a time when others, such as British Airways (which could now seriously struggle to make its belly-only cargo operations economic) were quick to retire theirs.

“It’s time for people that thought freighters were over to rethink. We always thought the combination carrier was the right model.”

Ideally, however, he noted: “Freighters can hold on to the network, but then more and cheaper bellies can reduce costs. That is the most efficient.”

Interestingly, cargo has been easier to manage than passengers, in a regulatory way.

“There have been some regulatory issues, but the authorities have been great with air cargo. Authorities worldwide have understood how important cargo is and they quickly found workarounds.

“On the cargo side it works. The passenger side is more difficult. That’s a question for next month, what countries have what regulations, and how people are permitted to travel – and if it’s even possible to bring back the bellies.”

Air cargo’s ability to adapt quickly, honed through years of volatility, has been crucial, said Mr Gerber, But, he added: “We have to be even more flexible in future and we have to react quickly to what will happen in the market.

“You have to understand that our business is very volatile, more than it was even, but it is also stable. Cargo delivers results, but they are volatile. Everyone wants a clear prediction and we can’t provide it to the financial guys.

“But volatility does not mean instability. That’s very important when it comes to investment.”

Nevertheless investment, again, will be a group decision: “If there is any money, we could consider investment, but you’d have to look at what’s going on in the group as a whole.”

Mr Gerber still sounds shocked by the speed of the crisis and puts it down to the increase in the pace of communications and the media, which sent multiple countries into lockdown simultaneously.

“The speed was really surprising. And it meant faster decision-making and the implementation of decisions.

“We also learned that we are still very, very flexible and able to cope with such fast developments. We were able to install the preighters and various workarounds all very quickly, and I am very proud of our organisation for that.

“But it feels like there was an over-reach. It’s very hard to believe that the pandemic caused such a big reaction.”

And the impact of that reaction is huge. Lufthansa Group has said that it would need to become smaller as it awaits full recovery, but the Cargo division is unlikely to see many cuts.

“We already did the ‘slimming down’. We don’t expect many redundancies in cargo, there was not much left after 2019.”

The pandemic has shown clearly the value in technology, and investments in digitisation will remain.

“The pandemic has seen customers more and more interested in online contact, and we have speeded up the implementation of our rate response system. A lot of people are at home, so it’s a good time to do this.

“Our collaboration with our customers is getting more and more digital. It’s still a people business, but increasingly there is digital investment. We are increasing our channels, and on the handling side, we are separating information flows from the physical handling.”

Mr Gerber is a big believer in IATA’s One Record initiative, “an end-to-end digital logistics and transport supply chain where data is easily and transparently exchanged in a digital ecosystem of air cargo stakeholders, communities and data platforms,” according to IATA.

“One Record is underway,” said Mr Gerber. “There is a bit of a delay right now, but it is our clear vision. It’s difficult to get a common system for an industry with many companies. Everyone has to invest and agree on a standard, and it’s a conservative industry.

“And it’s still not done, as you need a clear majority, but it is the vision of the key players.”

And the key players will remain in the market, while smaller companies could disappear.

“It’s hard to predict how the market development will go, and which airlines will survive. In 12 months we will see more clearly what really happened. But I wouldn’t expect too much consolidation. The big airlines will be helped by governments.”

Lufthansa is one of them. It has been much in the news this week as it tries to negotiate with the EC on the conditions for its €9bn German bailout – the EU wants it to reduce its slots in Munich and Frankfurt, but Lufthansa’s not keen. However, while losing, famously, €1m every hour, it may not have much of a hand with which to negotiate.

Is Mr Gerber fearful of an unlevel playing field after billions of dollars-worth of loans and subsidies are doled out unevenly?

“It’s difficult to predict how countries will act – but there was never a level playing field before,” he said. “AirBridgeCargo [an EU operator]  is funded by the Russians, and then there are the Gulf carriers. Not much will change; we will always have a different market and an unlevel playing field.

“But the European Commission will look at it closely, to achieve more or less fair conditions – in Europe, anyway.”

And the logistics market? Will the heavy reliance on China as a manufacturer, and long supply chains, give way to more domestic or regional trade?

“People will think about reshoring, but on a broad scale I think it will be very difficult. Globalisation was no accident, it was a purely rational decision, people are producing in the most efficient way.

“You can’t change overnight. It’s a political statement and some industries will look to move, but it’s not easy to change what has happened in the last 30 years; and it’s not right to change what is efficient.”

He’s right. It’s not easy to change what has happened over the past 30 years. But combination carriers may have to, even if supply chains don’t, as for a while at least, they must find a way to make belly cargo profitable enough to operate without the money in the cabin.

It’s going to be fascinating to watch.