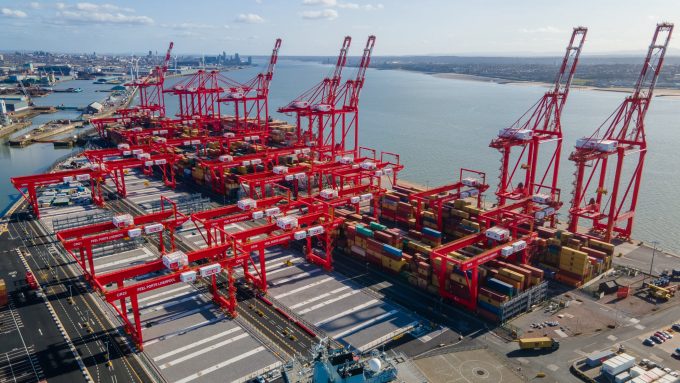 Allseas Global Logistics has added a sixth vessel to its China Xpress service out of Ningbo to Liverpool and MD Darren Wright told The Loadstar the company was looking for a further two ships to make a weekly service.

In addition, the forwarder has added a Rotterdam call to the return leg, which means the service rotation is now, Ningbo, Dongguan, Chittagong, Liverpool, Rotterdam and back to China.

Mr Wright said: “We added Chittagong because China was quiet, but it’s worked really well for us, so we will keep the call.”

Shippers, including supermarket giants such as Tesco and Asda, are understood to be keen on the service, with UK hub ports of Felixstowe, London Gateway and Southampton all continuing to suffer congestion and hinterland service issues.

In bypassing traditional port calls and heading directly to the north-western port of Liverpool, Allseas has tapped into around 1.2m-1.5m teu in regional demand – and with the China Xpress service handling just 1,800 teu around every 10 days, there is plenty of potential for growth.

Initially, the service was direct from Ningbo and Yantian to Liverpool, but its success is driving other operators to take a fresh look at providing services to Liverpool.

Simon Dixon, head of the container division at Peel Ports in Liverpool, believes Allseas understands that its service “has a shelf life”, which means that if, or when, rates fall substantially and demand declines, services such as the China Xpress may find it difficult to keep going.

However, he added: “Allseas listened to customers after they asked what they needed. They acted on that advice, and it worked for them.”

Peel Ports also believes French liner operator CMA CGM, which has recently started a service between Liverpool and Dunkirk, locally referred to as the Dunk, which links its FAL loop to the Far East with north-west UK, came about as a result of the success of the Allseas loop.

“Covid has shown that cargo needs to be delivered close to the market,” explained Mr Dixon. “Drivers want to do shorter journeys. If a box is delivered to an east coast port, a driver [from the north-west UK] can do one trip a day, but with the Dunk and Allseas services, they can do two or three runs and still spend the night with their families.”

Meanwhile, Peel Ports, which admitted major difficulties with its vehicle booking system (VBS) at Liverpool last year, claimed it had resolved those problems following the launch of an upgraded VBS, along with two meetings with hauliers in March and April, 20 hauliers in each meeting, to sort out their complaints.

Richard Mitchell, Peel Port’s director for container terminals 1 and 2, said one of the major points explained to drivers that what was causing the terminals’ problems was the high number of booking cancellations.

“The VBS  now has more features and is more user-friendly, but when we told the hauliers a major challenge was the high level of cancellations, they agreed we should charge a cancellation fee, like other ports,” said Mr Mitchell.

Another factor that has helped the port alleviate congestion has been a recruitment drive that saw more than 200 new staff employed over the past 12 months, taking the total at Peel in Liverpool to 829, including 600 port operators and 229 administrators and supervisors.