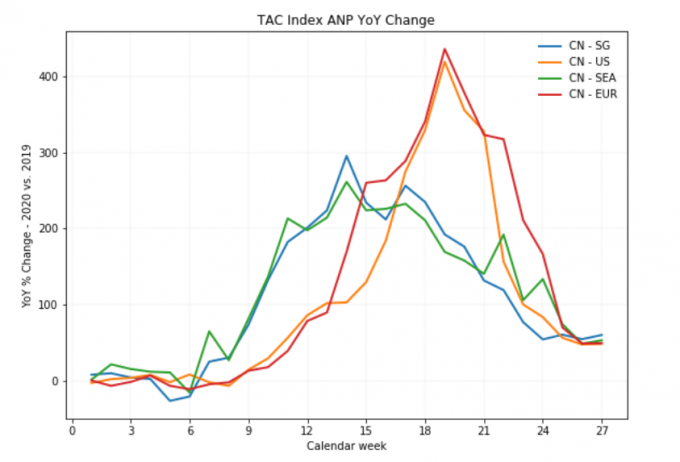 The charts reveal air freight rates are almost back to pre-Covid peak levels, with China-Europe at about the same rate as it was in November, at $3.32 – although China-US, at $4.38, remains higher than peak season, but matches March prices.

Transatlantic rates remain well above last year’s, however, and it is as yet unclear whether much passenger capacity will return soon, with Americans currently unable to travel to Europe, amid claims the country has not managed to control the spread of the virus. 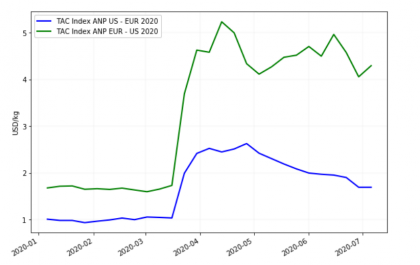 Fuel, meanwhile, is on the rise. IATA’s jet fuel monitor shows it has gone up 8.5% in the past month, although prices remain about 43% below where they were a year ago.

The fall in rates comes as carriers slowly begin to add passenger capacity and become less reliant on expensive-to-operate passenger freighters, which are only economically sustainable with high air freight rates and low fuel prices.

However, the news has not deterred European Aviation, which told FlightGlobal it would create up to 10 A340s into cargo-only configuration this year in addition to its current three, operated by Maleth-Aero.

Demand has fallen since PPE, initially required globally and urgently, is no longer so acutely needed. Retail cargo, according to several forwarders, is not yet back in the air, with shippers preferring to opt for sea freight or rail where possible.

Nevertheless, air freight benefits when unique demand situations occur and, as Ram Menem, former chief of Emirates SkyCargo, noted: “There will be further demand when a suitable vaccine is approved for the fight against the Covid-19, which, hopefully, will be in the near future.”

Air freight has made gains in e-commerce. But July is typically a slow month for the mode, with sea freight in its peak season, and this year appears to have a similar pattern. Freight Investor Services said: “Prices continue to drop throughout most of the basket routes.

“The Atlantic routes present positive support, potentially linked to a low passenger load factor. Hong Kong to Europe and Hong Kong to the US routes have been impacted the most, the former falling 61 cents and the latter by 82 cents. Shanghai to Europe and the US drop less than other routes, with only minor changes, of $0.08 and $0.14, respectively.”

FIS’s forward pricing curve expects August to show another drop, but less steep, from China to Europe, with prices then remaining broadly flat until the fourth quarter, which should see a slight rise. China to the US will follow a similar pattern, but with a small rise in the third quarter.