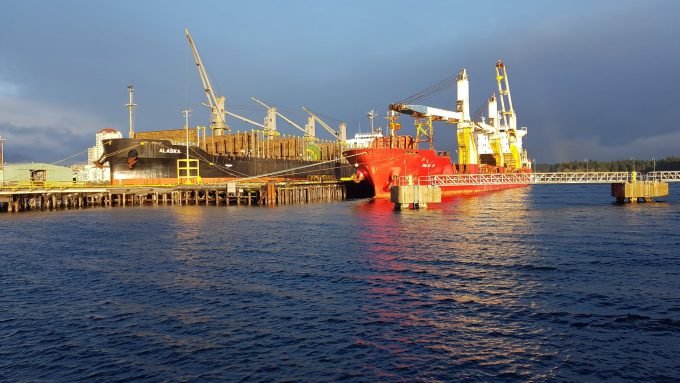 In the aftermath of the fire and cargo loss from the Zim Kingston, Canadian authorities are expected to use a barge crane to remove debris from damaged container cells, according to local sources.

The ship itself is said to be structurally sound, and the decision on when it will leave the area known as Constance Bank, near Victoria, will be taken by the master in consultation with local pilots.

On 23 October, two damaged containers onboard the 4,253 teu Zim Kingston, chartered to the Israeli carrier until April 2023, caught fire, alongside the loss overboard of 109 containers in extreme weather off the coast of Vancouver. No injuries to the crew were reported.

Unconfirmed reports suggest the vessel may head north, to Nanaimo Port on Vancouver Island’s eastern shore, about midway up the coast, to discharge containers. The port has the facilities and water depth to handle a vessel of Zim Kingston’s size.

On 1 November, the vessel’s owner, Danaos, declared General Average and has appointed Cyprus-based Albatross Adjusters as GA adjusters for the casualty. Shippers with cargo onboard must now await details of the GA security required.

Meanwhile, the clean-up operation from the accident continues, with some 35 helicopter liftings of 123 garbage bags and 65 bulk bags from a number of beaches, debris also being found at new locations, including Experiment Bight and Raft Cove. The operation is being supported locally by Quatsino First Nation people.

At the time of going to press The Loadstar was awaiting a response from Danaos, regarding a decision on a safe harbour for the vessel.

Meanwhile, the non-operating containership owner said it expected to record a “stellar performance for the next three years”, as a result of locking-in ocean carriers to more than $2bn in contracted charter party hire.

The Greek company now has 90% of its fleet covered for 2022 and has fixed and renewed several charters through to 2028, with huge increases in daily hire rates.

Q3 revenue included a $12.3m dividend from its shareholding in Zim, obtained as part of the carrier’s financial restructuring and during the nine-month period, Danaos received $3.9m from the receivers of bankrupt Hanjin Shipping, part of its $600m claim for unpaid charter hire. It was not stated whether the amount was a final payment.

Danaos CEO Dr John Coustas said there was no sign of the disruptions in the global supply chain abating and added: “This situation, despite its negative effect on world growth, had extremely positive effects in our market, which continues from strength to strength.

“The main contributing factors are an increase in demand, lack of vessels to satisfy such demand and low levels of productivity in the ports and other land-based infrastructure.”

He noted that newbuild deliveries in 2022 were expected to be fewer than this year and, in regard to concerns by some analysts about the flood of new vessels stemmed for delivery in 2023, said he was not overly concerned about the impact on the charter market.

He expects the arrival of the new ships to be balanced by the effect of new environmental regulations that will tighten supply.

Overall, he said, Danaos did not expect a dramatic difference in its longer-term outlook, “provided demand remained healthy”.

“We expect the strong market conditions to persist in the near term, which will support a strong re-chartering environment into next year and should ensure our stellar performance for the next three years,” he said.

After the purchase of six 5,466 teu vessels in July, Danaos operates a fleet of 71 ships, for a capacity of 437,000 teu. They are fixed on long-term, fixed-rate, charters to a portfolio of ocean carriers, including Maersk, MSC, CMA CGM, Cosco, Hapag-Lloyd, Yang Ming, HMM and Zim.

The availability of open container tonnage on the charter market tightened further in the first ...

Israeli carrier Zim has confirmed that its chartered  and damage-stricken vessel Zim Kingston will depart ...

Danaos-owned Zim-chartered vessel Zim Kingston, which lost 109 containers amid a cargo fire off the ...