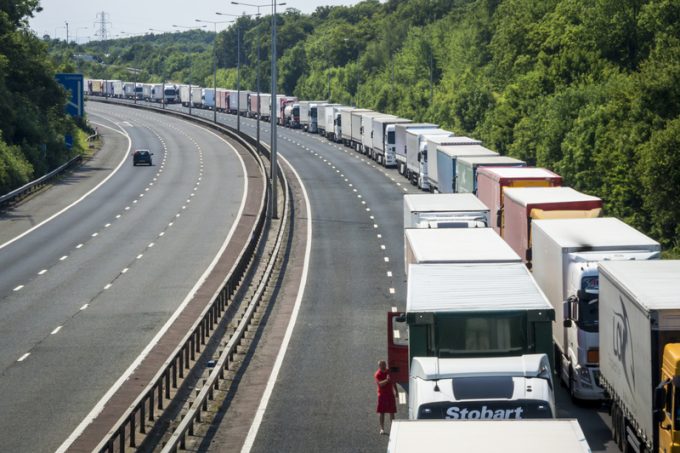 The UK government has returned to the drawing board after scrapping plans for a £250m lorry park in Kent, intended to deal with road congestion around the Channel Tunnel and Dover.

Reaffirming its commitment to a “permanent alternative” to Operation Stack – a procedure operated by Kent Police and the port of Dover during times of port congestion when lorries are parked along the M20 – the government said it would no longer defend a judicial review of the park, called by protesting residents.

Today, Highways England project director John Kerner said severe disruption during the summer of 2015 had underlined the need for a long-term solution to congestion when cross-Channel services are interrupted.

“Improvements at the port and changes in traffic management on the A20 near Dover have shown real improvements and helped prevent Operation Stack being implemented,” said Mr Kerner.

“[Now lorry park plans at Stanford West have been withdrawn] we have been asked by the transport secretary to immediately develop both an interim and a permanent solution to reduce the local traffic impacts if there is cross-channel disruption.”

Roads minister Jesse Norman said an arrangement with Manston Airfield and the Department for Transport had been extended to allow for continued use during severe disruption.

Highways England said it was working on several interim options, including continuing to hold HGVs on the M20, but allowing non-port traffic to travel in both directions.

One method would be to hold lorries in the centre of the motorway rather than on the coastbound carriageway.

FTA spokesperson Natalie Chapman told The Loadstar this would not solve the problem, as it still removed capacity for driving and would hinder HGV driver welfare.

While longer-term options were not specified, Highways England said it hoped to submit a planning application in 2019 after consultations early next year. These would likely coincide with a decision on an interim option, with implementation complete by March 2019.

But with the UK’s withdrawal from the EU expected that month, the FTA has said any failure in the solution could lead to “increasing problems” for Kent “in the years to come”.

Head of national and regional policy Christopher Snelling said: “As always with Stack, the best solution would be not to need it. With Brexit on the horizon and all the other issues that can occur on the Dover-Calais route, we simply won’t be able to guarantee that.”

The government abandoned its defence of 2016’s judicial review – called on the grounds that it had not properly accounted for the environmental impact of the lorry park – after deciding it couldn’t defend its own plans.

After that, transport secretary Chris Grayling announced the DfT would “immediately” start the process to promote a lorry park through the normal planning process.

“This will include a full environmental assessment and we will reassess the scope, scale and location, considering changes since the original lorry park concept was promoted,” said Mr Grayling. “In particular, the UK’s exit from the EU but also the need for ‘business-as-usual’ lorry parking in Kent.

“This demonstrates that the government is still serious about finding both interim and permanent solutions to tackle traffic problems occurring from disruption at our busiest border for lorry freight,” he added.

However, RHA chief executive Richard Burnett said he found it “beyond belief” that an environmental assessment was not undertaken, “simply on the assumption that it was not needed”.

“This red tape debacle is a complete disaster for hauliers coming over from the continent; can you imagine Operation Stack becoming a daily way of life?” asked Mr Burnett. “Two years ago we saw the misery of operators who, for many days, were caught up in the gridlock.

“Even the most basic requirements for HGV drivers, such as toilet facilities and drinking water, were non-existent; and for the people and economy of Kent, the cost was enormous.”

Mr Snelling added: “Whatever the solution, everyone from the hauliers to the residents of Kent all agree a better solution for Operation Stack is needed.

“The withdrawal of this application is a major disappointment and means proper management of a Stack situation may be many more years off”.