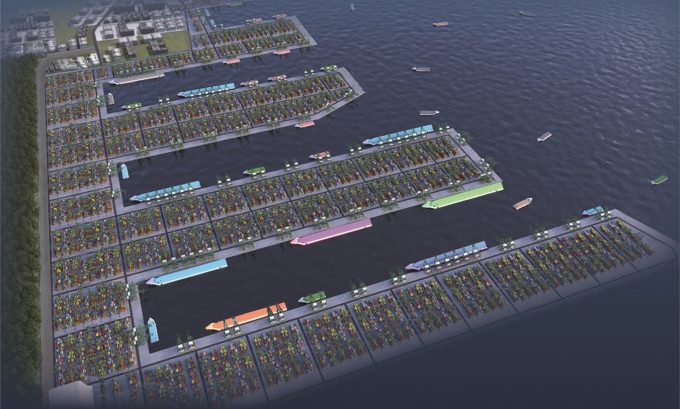 Singapore’s new mega-port is just months away from full operations, but it has opened its storage area early to help alleviate the supply chain bottlenecks plaguing container shipping.

Congestion has caused ships to arrive late, resulting in logjams of containers in major ports around the globe.

Ship arrivals  at Singapore are now 7.5 days late, on average, after schedule reliability fell to an all-time low of 33.6% in August, although this has since improved to 40%.

Schedule reliability issues were exacerbated by the Ever Given blocking the Suez Canal in March and Covid-19 ripple effects, among other things.

Senior minister of state for transport Chee Hong Tat said that following the Ever Given grounding, a ship which skipped a port call in the Persian Gulf came to Singapore, where it unloaded 2,700 containers originally bound for the Gulf. The containers were stored before being reloaded onto ships sailing to the intended destination.

Mr Chee said, “In doing so, [port operator] PSA enabled the shipping line to skip a port and catch up on its schedule, after a two-week diversion around the Cape of Good Hope.”

And in May, PSA assisted in diverting some ships and cargo when operations in Yantian port in China slowed, due to a Covid-19 outbreak.

“We have become the go-to port for shipping lines to catch up on lost time and connections, and also to untangle some of their operational challenges,” Mr Chee said.

Singapore was once the world’s busiest container port, surrendering its crown to Shanghai in 2010 – although the city state remains the busiest transhipment hub.

Currently, Singapore’s five container terminals are on the city fringe, the mega-port, being built in stages, is in the Tuas industrial estate in the western part of Singapore. By 2040, when the fourth, and final, phase of construction is expected to be completed, it will have an annual capacity of 65m teu, compared with the current 50m teu.

Under the first phase, the mega-port will commence operations with two berths opening by the end of the year.

Iraq’s ambitious plans for its future mega-port to offer an alternative to other Middle Eastern ...

Bangladesh exporters breathed a sigh of relief after Port of Singapore Authority (PSA) ended its ...