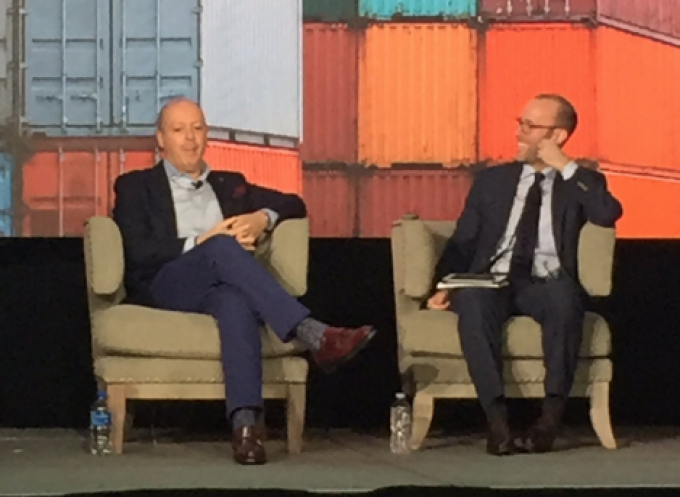 Despite being a founding member of a group of leading shipping lines that have formed an association to develop digital standards for the industry, the chief information officer of MSC has claimed that technology will not become a differentiator between lines.

“There are so many issues to address in container shipping that technology itself will not be a competitive advantage.

“Look at the airline industry – airlines do not compete on online booking, they compete on service levels, networks and prices,” he said.

Mr Simha was explaining the reasoning behind the creation of the association announced in November.

“We are trying to target two-to-three industry standards within the next couple of months, depending on regulatory approval [for the organisation],” he said.

“This is nothing new; standards have enabled other industries to move forward, and we believe a standards-based approach will benefit everyone.

“The tech suppliers can then create products for all of us. Customers will benefit because they can get more products from tech suppliers, and for the carriers it allows for better connection to our supply chain partners, such as ports and hauliers.”

However, he also defended the decision that membership of the association would not be open outside the carrier community: “Everybody’s input is welcome, but we need to keep the number of decision-makers to a manageable size – it was the carriers’ chief information officers that came together to establish the pain points. If we can simplify how we communicate with our supply chain partners then that will benefit everybody.

“I have spoken to many ports that complain they have to have hundreds of different systems to talk to the different carriers,” he said adding that MSC’s own requests as a customer of different suppliers around the word was “really complicated”.

“We have thousands of transport providers, thousands of ports, warehouses and depots and hundreds of regulatory requirements that vary country by country. This situation has resulted in thousands of systems operating independently, that often use different languages, terminology and are subject to different regulations.

“And beyond MSC, the problem is much more complex and sometimes feels insurmountable. We are still arguing about location codes, messaging standards, both between carrier and with our customers, and regulatory definitions, and there are always problems with interoperability.

“We need standards to enable the introduction of new tech,” he added.