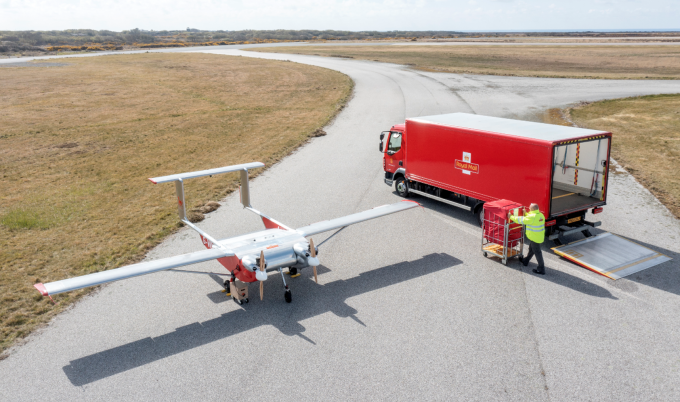 Royal Mail is entering into a partnership with Windracers Group, a maker of twin-engined flying-wing unmanned aerial vehicles (UAVs), to establish 50 postal routes across the Scottish isles and other islands.

Powered by two-cylinder petrol engines, Windracers’ ULTRA (unmanned low-cost transport) drone can carry 100kg up to 1,000km, making it more than capable of reaching the Shetland and Orkney islands, the Hebrides and the Isles of Scilly.

The development follows a successful trial last month, when Royal Mail delivered mail from Lerwick’s Tingwall Airport to Unst, Britain’s most northerly inhabited island. Subject to approval from the Civil Aviation Authority, the 50 drone routes will incorporate some 200 drones over the next three years.

“I’m not going to compare it with a 747 flying the Atlantic, but we are talking about small manned aircraft,” he said. “[The islands] have a lot of manned aviation which is weather dependent and constrained by pilot availability and maintenance schedules.

“It is not that easy to run an aviation service in some parts of the world. The likes of FedEx and DHL fight pretty hard to maintain pilots.”

The manufacturer also claims that the drones can achieve CO2 emissions savings over small-scale piloted aviation and, to some degree, ground transport, through point-to-point delivery logic. Mr Scales explained: “Royal Mail has started to investigate the chain of these flows from its main sortation centre to the islands, and has found there are quite a few modal changes, and these add up.”

Mr Scales told The Loadstar his company was working on using sustainable aviation fuel (SAF) as well as shifting to hydrogen. However, he sees the craft as utilitarian and rugged, based on proven technology, and prioritising reliability over leading-edge tech.

“We are not technologists,” he said. “[Chairman and co-founder Stephen Wright] and I know what it takes to run a successful business. It is easy to make a very expensive UAV, but it’s lot harder to build one that can deliver value in a sustainable fashion. We are creating a Hilux of the skies – very strong and easy to maintain. It does not have to look the best, but it is about function and economics.”

CNBC reports that Royal Mail revealed plans on Friday to cut up to 6,000 jobs by next ...