While many airlines finished 2018 in a negative mode, after the highs of 2017, it was in fact a good year for the carriers, and volumes were far more stable throughout the year, a better outcome for their customers.

Cargolux said it saw freight tonne km of 8,409 across its network, including Cargolux Italia, while available tonne km grew to 12,375m, and a load factor of 67.9% – down from the previous year’s 70%. It said its “high aircraft utilisation rate” remained stable.

The carrier released different statistics this year than last, making it harder to find comparisons for FTK and volumes. And without insight into cash flows and debt, it is also hard to see how Cargolux is really faring.

The carrier acknowledged a “global softening in market demand in the second half of 2018, a shorter peak period compared with 2017, uncertainty regarding potential trade wars, geopolitical unrest and Brexit,” but added that it “managed to improve on its performance compared with the previous year”.

It said it had seen better “yield quality”.

“Cargolux achieved exceptional financial results in 2018 despite slower economic growth in the second half of the year.” said Richard Forson, president and CEO.

“Strong focus on the management of our capacity and yields, increased demand for specialised shipments, a record year for our charter division and the diversification into offering ACMI solutions all contributed to the performance achieved. Our employees demonstrated once again that hard work, dedication, and expertise are at the heart of our company’s success and sustainability.” 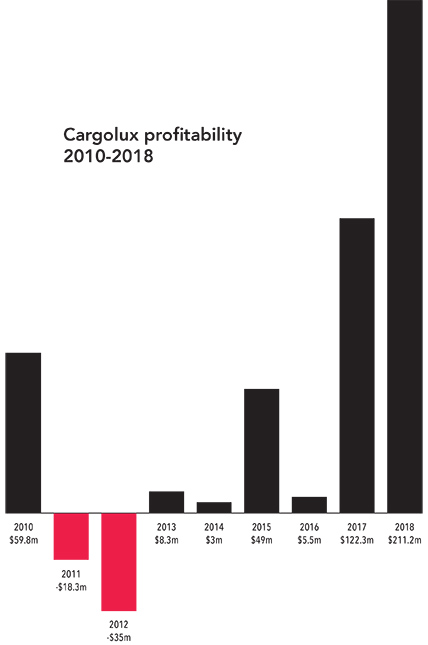 The carrier said one of the “main focuses was to undertake a complete IT overhaul to streamline processes, synergise teams internally, and enhance customer experience”.

It added: “This project aligns with the company’s lean and green philosophy and its flexible and adaptable business model. Complemented by the ongoing digitalisation initiatives, this will enable Cargolux to stay at the forefront of the industry and keep providing quality services in a lean and efficient manner.”

It also added, on corporate social responsibility, its focus on reducing its carbon footprint and fuel-saving programmes, which last year saw 6,270 tonnes of fuel saved and 16,750 tonnes fewer CO2 emissions, despite company growth.

‘Pedalling hard to stand still’ is probably as good a way as any to describe ...

Analysis: Done kidding around – Kuehne takes a page out of DSV's book

There is no denying that quarterly trading updates are currently the lesser evil in logistics, ...

So United Airlines’ third-quarter results are in, and they are not pretty. On the (slight) ...

“Well, we are all learning to live with the changes that have been presented by ...

Ocean carriers on a high and 'surfing a wave' of profitability

Ocean carriers are “taking advantage of the moment”, according to Alphaliner, boosting their balance sheets ...

John Menzies focused on the positives in its half-year results announcement, noting £27m ($34.7m) of ...

CMA CGM has published strong second-quarter results on the back of capacity and rate discipline, ...

On the wires: Untangled Ceva Logistics – the cracks are well hidden

“CEVA Logistics’ turnaround plan is underway and in line with our expectations.” – Rodolphe Saadé, ...